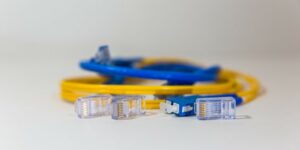 Modern life with the ubiquity of digital devices is unimaginable without fiber optics. This invention enabled the split-second transfer of data. Like lead pipes developed by Romans to carry water, fiber-optic lines allow free flow of information. These high-tech “pipes” convey phone calls and emails across and between the continents, and it takes a takes a fraction of a second!

What Is Fiber Optics?

There are several ways humans can exchange data over the distance. First, there were the stationary landline telephones. the sound of your voice was first channeled into a wall-mounted socket. From there, it travels to the exchange point in the area. Next, came cell phones, which use radio waves for the same purpose. Fiber optics represents the third method. As an example, take the fiber optic drop cable. Here, information is coded in a beam of light and sent down a special fiber, which is made of glass or plastic.

The technology first emerged half a century ago. Implemented in endoscopes, it allowed physicians to examine internal organs without surgery. In the 1960s, it was adopted for telephones. So, how exactly does an optic fiber line work?

The technology is purely light-based (hence the name). For instance, data sent to a friend’s PC will become light pulses that travel down the cable to the other end. During the journey, each light particle will repeatedly jump off the walls. A certain angle forces the beam to be reflected back. Thus, the glass functions like a mirror. Another thing trapping the light inside is the coating of the core, which is produced by another type of glass. At the final destination, the pulses become electric again.

If you examine a cable section, you will identify narrow glass or plastic strands; up to a few hundred in number. The thickness of each strand is a tenth of a hair, but it can carry thousands of phone calls – in fact, 25,000. Hence, the capacity of a single fiber-optic cable is enough for several million calls. There are two main types. These determine how light will travel within such lines.

In this case, signals move straight along an extremely fine core (5-10 microns). They do not bounce off the inside. This is how cable TV and broadband internet generally work, and they may send data over 60 miles.

Here, each fiber is as much as 10 times bigger, and the beam may travel by various paths (these are colored differently) — that is, in several modes. Such cables only work over relatively moderate distances.

Hence, compared to the old-school copper wires, fiber optics is a more advanced method of data transfer. Aside from covering longer distances, it also enables high speeds, cheaper maintenance, and enhanced reliability. Without this invention, people today would be less connected.

How Does That New Chip Card Work, Anyway?