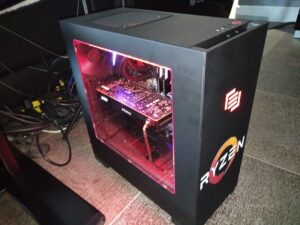 Part of the problem with the PC market is that the competition between AMD and Intel that helped drive advancement and excitement kind of evaporated last decade and processor updates got boring. It was just the latest release from Intel and even they didn’t seem that excited about them anymore. This week Ryzen, AMD’s latest processor, went on sale and I’ve been pounding on a Ryzen system for the last day or so and have some observations.

Ryzen is Better Than Core

Here I’m talking about the brand and I figured I’d capture this thought. In a brand, you want a name that can convey a positive image of the product without creating confusion. Arguably the best processor brand in the market was Pentium, created by the best CMO that Intel ever had Dennis Carter, they were able to iterate it numerically (Pentium 1, 2 , 3 etc.) so folks knew they were getting the latest and it grew to be the power in a still emerging PC industry.

And, of course, a subsequent Intel CMO thought to herself, screw that, let’s do something different! And Core was born. The problem with Core is that processors have cores so you ended up with a bit of a mess that you couldn’t easily iterate. For instance, a 2 core 3rd generation processor might be called a “Dual core Core 3”. Intel then went to a good, better, best naming scheme so you now have Core I3, Core I5, and Core I7, and then generations so you now get something like a 7th Generation Core I5 with 4 cores. I’m thinking there is a variant of the old Abbot and Costello “Who’s On First” riff that would play well here. I really think every Intel CMO should have a big sign on their cubical wall, that sign should have 5 words on it “Do What Dennis Did, Stupid”.

Ryzen sounds like risen combined with Zen which conveys both performance and peace of mind, two positive attributes needed in most tech products. And Ryzen isn’t tied in any way to any other term used to define a processor so it is far closer to the Pentium standard than Intel’s current offering. At least someone paid attention to Dennis Carter. Hmmm, it suddenly strikes me where that sign might actually exist…

It Is Selling Really Well

First indicator of this is that stores are selling out of the processor so you know hobbyists are buying it but on Amazon, when you search on an Intel Core processor you will now see under the “what people are actually buying” header that while Intel remains #1 Ryzen is generally #2, and #3. This shows a rather impressive sales ramp for a part that has only been in the market for a very short period of time.

What I think is particularly ironic is that both Intel and Microsoft really got on the core bandwagon about a decade ago and I can recall Intel’s then CEO getting up on the stage to showcase a prototype processor with over a hundred of the damn things. Microsoft then went back to the drawing board and starting rewriting code to make use of this anticipated uptick in cores but Intel seemed to conclude that what they already had was enough. Now, back then, Intel sent me an 8-core system and I was hard pressed to even get 3 cores to light up even though that system spun my electrical power meter like a top. Now, with the new Creator’s Edition of Windows I’m lighting up 16 cores (8 virtual) in the Maingear Ryzen test system (damn they do nice work, picture is at top) showcasing just how far Windows has gone and why Ryzen seems to kick butt with Benchmarks like PCMark 8 and Cinebench.

Intel still outperforms in gaming, though they carry a pricing premium (be aware this is changing as Intel appears to have taken a significant pricing action) if you play games they way you should and close down the other applications. However, I noticed that if you don’t, and I don’t, those extra cores do carry the load for those background applications suggesting that advantage may be offset depending on how you game. Part of this is because, with gaming, the graphics card remains more important and because Ryzen is still too new to really have games tuned for it yet. I should point out that my Intel system is running an NVIDIA Titan X card while the AMD system is running an NVIDIA 1080 card and the difference between those two cards is impressive and clearly favors the Titan X which is an AMAZING graphics card.

By the way, as a side note, AMD sent out test systems with the NVIDIA part to showcase they weren’t going to favor their own cards which is really important if they really want to run against Intel. I should also add that Ryzen is a bit of an overclocking beast, the is specified at 3.6 GHz, but I clocked mine up to 4.1 GHz (water cooled) with no issues what so ever. I doubt I’d try this with an air cooler though.

Speaking of Overclocking Ryzen comes with a downloadable app called the AMD Ryzen Master which allows you to change motherboard performance settings from within the OS. This is incredibly handy particularly if you don’t want your overclocked system to do ugly things to your power bill when you don’t need overclocking. Oh, and if you get a Ryzen with a fan, it’ll actually light up for once and it looks nice in a case though, personally, I’d go with a water-cooled solution because overclocking is a core, no pun intended, feature.

Wrapping Up: Competition Is A Good Thing

Now Intel will surely respond and they have already responded with lower prices, up to $300 on some of their most expensive processors. So, even if you don’t buy Ryzen, AMD just saved some of you a ton of money. I expect Intel will now be busting their hump to come up with something that will put AMD back in their place and AMD isn’t going to let them do that without a fight suggesting the next generations of processors from both firms will advance far more quickly. That means more performance for games, more performance for applications, and even better system builds. Regardless of whether you like Intel or AMD more, that is good for all of us!

The Small World with a Large Audience: The Life of a Writer