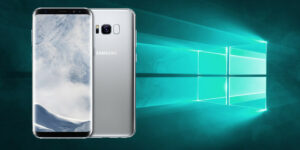 Do you love the Samsung Galaxy but would not want to leave all the apps that Windows offers? This is your chance. You would be able to use the Galaxy S8 and S8+ that will be packed with Windows’ Apps, as revealed by Windows. These phones are set to hit the market coming May.

For some years now, Microsoft has been able to successfully craft a version of Android through its productivity apps, and would gladly apply their cutting-edge technology to the new Galaxy 8 series. This is to help Windows lovers have access to all Microsoft applications – OneDrive, Office, Outlook, and Cortana, whiles still profiting from an Android operating system.

Microsoft is trying to use this move in order to give their customers and the world more cloud-based services. Because when it comes to the ‘cloud’, we know exactly what they can do. Having a Samsung galaxy packed with Windows apps, and the ability to ‘cloud’ all you want will be a game-changing move.

When it comes to Android-based mobile devices, Samsung is undoubtedly the best in the market. Microsoft’s move to configure this phone to include their own apps will not just ensure that users get access to cloud-based services, but will also mean that the company will get a better standing in the mobile phone market, and give users better choices.

Though Microsoft has two-fold plans: a focus on the back-end and then the cloud-based benefits, it’s most likely also look at its commercial customer, the one that provides Microsoft a chunk of the revenue.

To some in the tech world, this is also a big competitive move for Google, who is in the race for some cloud-oriented services with Microsoft.

All in all, it is the user that is at the center of the benefit: more choices, more robust devices, and more experience.