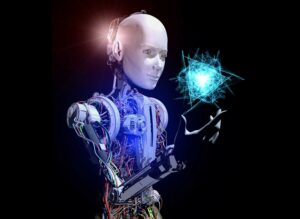 This week IBM announced significant progress toward their Quantum Computing endgame where this technology is deployed widely and solves massively complex mathematical problems at unbelievable speeds. IBM has the largest public Quantum effort and arguably has the lead in Quantum Computing development though companies like Alphabet, Intel, and Microsoft are accelerating their own efforts in this area.

Their latest advance is the IBM Q Experience and it promised to significantly ramp the number of people able to program and create solutions on this emerging platform. However, I think there is another huge step coming they aren’t talking about yet and it involves Watson’s Deep Learning platform, and this could be another huge game changer.

The Phases Of Quantum

IBM lists the phases of Quantum Computing development as follows. Quantum Science which is mostly owned by scientists and theoreticians which focused on Quantum Theory and created the foundation for a future of Quantum computing which has been ongoing for years. Quantum Ready which is where we are now where we can demonstrate the potential for Quantum Computing more accurately and begin to create hardware and simulations that can be used for both experimentation and training in Quantum computing. And, finally, Quantum Advantage where we can begin to apply the massively parallel power of Quantum Computing to real world problems that can’t be solved by conventional computers timely if at all.

Recent progress in this effort has been impressively fast given what appeared to be a very slow start over the prior decade or so. In 2016 IBM was able to bring out the very first Quantum systems and make them available to clients and the public. Subsequent to that they released the open specification for Quantum Cloud APIs which have been downloaded a massive 190K times (recall we are still some time away from a true production ready solution). There have been over 150 research papers on the effort using the IBM Q Experience cloud platform testing the fundamentals of Quantum science using IBM’s Q tools. The hardware has improved so much that users are now seeing significant advantages to using actual Quantum systems over simulations across the 10 million experiments which have been run in the IBM Q Experience (impressive for a program that is still in Beta).

In short, this will be one of the few, if not only, time that the developer community may be fully up to speed before the first production ready Quantum computer is released. This suggests we are within a 10-year window for actual deployment. And there is an increasing chance we are within a 5 or less year window if progress continues to accelerate in a non-linier fashion.

IBM presented a powerful solution towards the need to have a pre-existing ecosystem of trained users before the first production ready Quantum computer came to market and to have these user help define the tools that would eventually define this future mature market. But, as I watched, it occurred to me that IBM had another huge advantage that they had yet to explore. Their powerful Watson AI platform.As IBM took me through a demonstration of how you could use their Q Experience platform to both learn how to program, using Python, a Quantum circuit and how to then build a Quantum experiment it became clear to me that a Deep Learning AI front end to this process would be massively helpful. IBM has this platform in Watson and the result could be a solution that would help refine a problem so that it could be programmed effectively on a Quantum computer but using a Deep Learning computer as an enabling platform. Watson could assure that the problem be properly routed to the appropriate resource whether that be a more traditional computer, a Quantum Computer, or even a blend of the two, and it could help validate the result comparing it back to the goals originally set by the user. This would both significantly reduce the time to completion of the project and assure the quality of the result.

Such a blended system would significantly accelerate not only the true value of the coming Quantum computers but also improve the comparative advantage of using this resource, by making sure only appropriate projects were run on the problem.

And that is just putting Watson at the front end, now imagine we backed Watson up with a Quantum Computing integrated resource. The result would give Watson an effective superpower with regard to problems that no AI can even come close to addressing now.

IBM’s true competitive advantage will therefore lie with a blend of Watson and Quantum Computing and I don’t know of any other company that is within 5 years of where IBM appears to be right now.Just another example that we live in amazing times.

How A Repricing Solution Can Improve Your Online Business