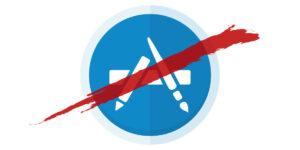 Those who are part of the App Store affiliate network have recently been contacted about the change in affiliate commissions – commissions move down from 7 percent to 2.5 percent starting 1st May 2017. This amounts to a 64 percent commission reduction. Though it might not be something big for users of the App Store, it has big implications for the entire App Store environment.

Many webmasters who have App Store affiliate accounts are given unique IDs. If a customer purchases an app through the unique ID/link, Apple offers a little cut of the sale to the partner in question. Developers are still entitled to 70% of sales and the partners are given incentives. If you sell an app, for instance, that comes at $1, it means your commission will amount to a few cents. However, as they say, little drops of water make a mighty ocean, so it is possible to make good money depending on how many buyers you direct to the App Store.

Around 2009 when the App Store was still in its infancy, websites that subscribed to the affiliate program made relatively good money. At that time the iPhone didn’t perform much, and the App Store came as an innovation for Apple users. WhatsApp, Snapchat, Uber, and Instagram didn’t exist. Yet many websites made money. That time too, many affiliate programs had not been developed. As technology increased and many companies entered the market, it surely seems that Apple will surely have to reduce its payout.

Though App Store commissions are not viewed as profitable by many websites and blog owners, others were using it, and with rigorous marketing tactics, were making money out of recommending apps.

Websites and bloggers are still making money from the App Store, but with the new decision to reduce commissions, the ROI for App Store affiliates is surely going to dwindle.

The commission cut could also mean a lot of people will stop using it, especially those that are engaged in App Store product reviews for money. However, Apple might be planning something bigger for customers. Let’s cross our fingers and see what happens.

update: Ric from macgamerhq informed us, that apparently the commission reduction applies only to in-app purchases. Although Apple wasn’t really clear on that.

How AML Software Solution can Prevent Income via Illegal Activities?