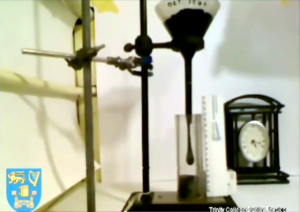 This experiment was started at Trinity College Dublin way back in 1944. Its purpose is to prove that tar flows, and indeed it does let go of a drop about every ten years. The thing is that nobody has ever seen that happen, bringing up the “if a tree falls in the forest” scenario. The Nature article on this event even mentions another experiment whose last drop was missed because the camera monitoring it was offline. This time around they did get some footage of the (un)momentous event which you can see below.So here’s the challenge for clever hackers: What’s the easiest rig you can think of that won’t just continuously film the experiment but can also ensure that you get the goods on tape when a drop does fall? We see all kinds of high-speed shutter triggers — here’s one of the latest. But we don’t remember seeing an extremely slow version of the same. Let us know your idea by leaving a comment.This one is only a copy… They are watching tar in Queensland since 1927: http://smp.uq.edu.au/content/pitch-drop-experimentThey didn’t make the tube long enough to see an actual drop. The blob landed before it broke. 69 years is a long time for such a mistake.