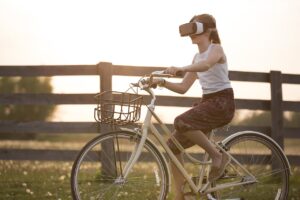 VR is the future of tech. To think that some decades ago the idea of VR was like something out of a Sci-Fi movie. Today, however, VR is upon us, and hundreds of apps are developed yearly around the concept.

You might want to join the bandwagon or have a great app idea that you think would be perfect in virtual reality. Either Way, virtual reality app development is not as complicated as it used to be, and even you can create a VR app.

This article will show you which industries are currently receptive to VR apps. Hopefully, you can gain some inspiration to create content to fulfill a need in one of these sectors.

There are currently four industries with ample opportunities for VR apps. They include real estate, education, travel and lifestyle, and the automotive industry.

This is one of the very first industries to get an influx of VR apps, and it’s obvious why. Students tend to remember and understand more of what they experience rather than what they read in a textbook or hear in the classroom. This why field trips and other hands-on learning experiences are encouraged in schools today.

VR may not be as exciting as traveling to Rome or going to the zoo, but it’s a close second. Besides, with VR there is little limit to what students can do, and how often they can do it. It is still an overwhelming experience for young boys and girls to see the eight wonders of the world, or to visit a different planet, whether in a virtual world or not.

Some great educational VR apps include Vessels VR that helps elementary students learn about the circulatory system using Oculus Rift. Vessels uses 3D animation to deliver this experience since it’s impossible to get a 3D video of the actual events in the human body. They provide models of the Oculus Rift development kit and assemble it in Unity 3D.

Another great example is EON Reality which provides a library of educational VR experience in the form of apps.

One less exploited area in education VR is mathematics and engineering. Few apps cover this aspect, compared to the creative arts and human science subjects.

This is a pretty new industry to VR tech, but it’s very clear that there is a lot of potential within it. Just recently Panoptic Group, a real estate group, collaborated with app developers, Arch Virtual, to make 3D VR tours as a way of showing off property to potential buyers. Of course, the results have been astronomical, and according to the real estate group properties are selling at light speed because of the innovation. It’s hard to think why a lot of real estates agents haven’t incorporated this into their business.

People want to get a feel of a home and what they can do with it. VR can help them do this with ease, no more driving from location to location to tour houses. Instead, create VR replicas of each home and simply let buyers take a virtual tour. Of course, when they find one they like they can then take a real tour.

There are so many ways VR can be incorporated into the travel industry. For one, people can get to experience places that they probably do not have the means to visit in reality. Travel companies can give customers the choice of experiencing different locations before making a choice to avoid disappointment.

Ascape virtual reality app is a good example of a travel VR app. The app was recently released for both Android and iPhone devices, and gives users the chance to explore some of the biggest cities in the world. The app is perfect to help you figure out where you would like to go for your next vacation, or simply check out places you probably would never visit like North Korea.

Discovery is another big travel VR app that has users buzzing. The app lets users experience adventurous TV shows in an immersive manner. Popular shows on the platform are Gold Rush, MythBusters, and Survivorman. Users can swim in the deep sea with sea creatures, learn to live in the wilderness and forage for food or ski down a hill with Bode Miller. The app is best for mobile with Google Cardboard, Samsung Gear VR, or any other similar viewer.

It’s exciting to think of what VR and the auto industry can do together. Luckily enough, we already see glimpses of the great things that are yet to come.

Major car makers like Ford and Audi have adopted VR as a part of their user experience. These companies have created 3D worlds that allow customers try out a various model of cars and even do some customization before getting the car in real life.

There are plenty advantages to this. For one it will help customers make better, quicker decisions. Also, manufacturers can showcase new model cars to customers and get feedback before making a prototype.

Ford and Audi are not alone though, Volvo just recently released a VR app that lets users test drive the new Volvo XC90 from anywhere. The app features a 3D animation of the car interiors as well as a 3D video footage.

Gaming is last on this list because it is the very first and most popular industry for VR apps. That said, there is still a lot of room for improvements and more immersive experiences within the VR gaming world. There are several genres like horror, and racing that lack truly amazing, and immersive experiences for users.

Virtual reality might not exactly be a new concept, but it is far from a fully developed one. Imagine what VR will be in years to come, it is a rapidly developing world with mind blowing plans.

For app developers, developing VR apps is the next big thing, for those with great ideas but less experience in the developing world, take steps to start working on your idea while there is still room for it.

Harnil Oza is a CEO of Hyperlink Infosystem, a mobile app development company having a team of best Indian app developers who delivers best mobile solutions mainly on Android and iOS platform. He regularly contributes his knowledge on the leading blogging sites.

How to fix your credit yourself