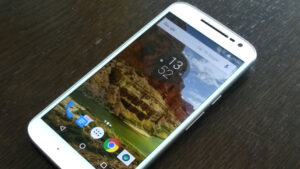 It’s no longer Motorola, but even with a Moto branding it has been hard for us to validate Lenovo’s decision to come out with two Moto phones in 2016.

After taking a closer look at the Moto G4 Plus, it’s time for us to see if the Moto G4 is worth the shot, especially in a market which is currently flooded with a plethora of options to choose from.

Motorola has retained touches of the earlier MotoG series, such as the wide earpiece, metallic finish on the sides sides, a long strip for the camera on the back, punctuated with an ‘M’ logo in a dimple just below. The similarity in design ends there, with the smartphone now both thinner and larger than previous generations.

The Moto G4 is slimmer than every other Moto series.

Performance wise, the phone can handle a lot of work, while managing many tabs simultaneously. We like that Lenovo has kept the Motorola tradition by offering a near stock Android interface that is slick and easy to use.

The 13-megapixel rear camera matches the ones provided by the competition at this price range. You get images that are well detailed, and warm in colour without capturing a lot of light.

You get a 13-megapixel snapper on the Moto G4.

Moto G4 is also fueled by a 3,000 mAh battery, which comes with the quick charge feature. Just like the Moto G4 Plus, it promises to give a 6-hour backup in 15 minutes of charge.

For a small price difference, Lenovo gives us the option to choose between the Moto G4 and the Moto G4 Plus. However, it must be noted that the former gets a lower megapixel camera at the back, and misses out on the fingerprint scanner on the front.

That scanner is missing on the Moto G4.

The Moto G4 gets a 13-megapixel camera, while the Moto G4 Plus comes with a 16-megapixel snapper and that for almost the same price, it is easy to guess which one we’d go for.

If given the choice between the Moto G4 and the Moto G4 Plus, we’d prefer the latter. Reasons being, better camera in tow, equipped with a fingerprint scanner, and better value for the money spent.