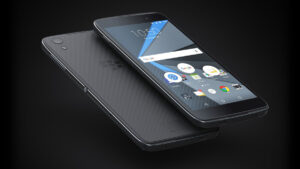 If one isn’t enough, then now you’ve got another Android phone, made by BlackBerry. The difference is, they’re not making the phones anymore. The Canada-based company claims to have made its newest model branded as DTEK 50 (peculiar naming decision, that), as the world’s most secure phone.

Priced at $299, DTEK 50 will be available in various markets, though India is not in their pipeline yet. This is Blackberry’s most affordable offering in a while, but there’s a reason behind their sudden change of heart.

Not Made by BlackBerry

As reports indicate, BlackBerry has merely re-branded the Alcatel Idol 4 to make the DTEK 50 which gets a heavily secured Android OS layer.

The phone’s got mid-range specs like 5.2-inch 1920×1080 pixels display, 3GB RAM, 16GB storage and packing a 13-megapixel camera at the back. For approx Rs 20,000, these aren’t features that will get anyone excited. But there’s more to know about the supposed ‘secure phone’ aspect of the DTEK 50.

BlackBerry has been revered in its BB base all these years, but even that base might have to see whether they get anything meaningful from spending on the DTEK 50.

BlackBerry manages to pack in all of its security suite on the DTEK 50. You also get access to hub, their signature on-screen keyboard. But that’s got nothing to do with security, does it?

BlackBerry claims that all your data on the DTEK 50 is thoroughly scanned for any possible malware mishaps. It also alerts the user when another person is accessing your details, reading messages, or even when an SMS is sent.

However, the whole point of making a 20K phone as the world’s safest device doesn’t really add up for us. Specially, when a lot of users went on to buy the BlackBerry Priv which was also pegged to come with a secure version of Android, but at a higher price.

Is BlackBerry trying to say that the DTEK 50 is more secure than the Priv? If that’s so, then the very few buyers of the first BlackBerry Android phone will be scratching their heads reading this.

No matter what BlackBerry might say, their future with phones heavily relies on how the global consumer sees the DTEK 50. If they can manage to keep themselves afloat by the end of this year, chances are BlackBerry might have finally found an affordable way to stay in the phone business with their version of Android.

Why should you hire a lawyer for your start-up?