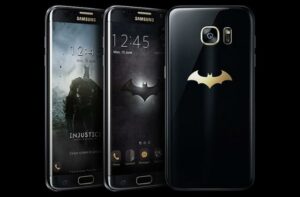 Following last years’ Iron Man Edition Samsung is celebrating the third anniversary of the mobile game Injustice: Gods Among Us with the special Galaxy S7 Edge smartphone, the Injustice Edition.

The Korean brand has added this limited addition variant of the S7 Edge with a black & gold dual tone finish. You also get a real gold-plated Batarang and a rubber phone case modelled after Batman’s armour.

And guess what, there’s a Batarang logo embossed in gold at the back of the phone. The Injustice Edition comes bundled with a Gear VR in select countries, along with Injustice game credit and Oculus VR content vouchers, the company said.

Luckily the Injustice Edition will not be as “limited” as the Iron Man Edition. According to Samsung, the special edition phone will be available from next month in countries like China, Singapore, Korea, Latin America and Russia, with more countries expected to follow.

Play the Injustice: Gods Among Us on the limited edition phone. (Photo Courtesy: YouTube Screen grab)

This special model has “enhanced hardware and software capability” alongside larger battery capacity which should make the mobile gaming experience a bit better.

1,200 Light-Years Away Planet May Have Active Life