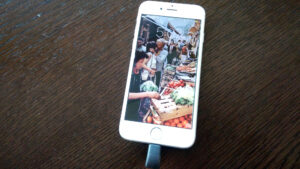 Sandisk clearly has a soft spot for Apple iPhone users. First, they made a USB flash drive that got supported by a built-in battery for transfer use, and now you have the iXpand 2016 edition, which looks like any other USB flash drive but with the twist of a lightning connector for the iPhone/iPad fraternity.

You can get the new iXpand(32 GB) for around $60 and that’s the price most iPhone (read: 16GB) users will have to pay for that extra storage space.

Over 99 percent of iPhone users (16GB variant) at the moment have no option but to delete the content from the phone to free up some usable space, which makes the iXpand 2016 edition something of a godsend.

Now isn’t that staggering? But no one can argue with the fact that those 99 percent had it coming. The reason why the 16GB model sells the most is not because people really want that variant; it’s because it is the cheapest iPhone available.

But that’s not all, Sandisk has also improved on the software bit of the flash drive. We’ll openly admit that in the first iXpand as a product, both hardware and software were a work in progress. So it’s pleasing to see that the brand has made the tweaks that work in its favour now.

The iXpand flash drive is compatible with iPhone and iPad running on iOS 8.2 or later.