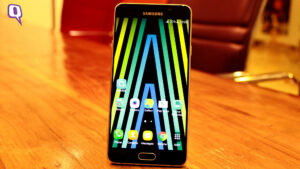 Samsung makes a host of phones ever year, but most of its sheen is absorbed by the flagship Galaxy S series. But in between the Galaxy S phones, you have the A series, which starts with A3 and goes up to A7 across different price points.

The Galaxy A7 series is Samsung’s response to varied affordable flagship options that pack meaty hardware and don’t cost a lot. The Galaxy A7 (2016 version) is up against options like the OnePlus 2, the Xiaomi Mi 5, and the Huawei-made Nexus 6P.

Samsung Galaxy A7 gets a Super AMOLED resolution display.

Samsung has learnt from its design mishaps (yes, we are talking about the Galaxy S3 and S4), and since the days of Galaxy S6, the change has been made for good. The Galaxy A7 borrows its materials and looks from its bigger brother and we have nothing to complain about.

The display quality is high in colour as well as contrast.

The glass back panel of Samsung Galaxy A7 looks good but is slippery.

The plastic back panel has given way to 2.5D Corning Glass construction that makes the phone look good. The super AMOLED display is nothing new for us, and with the Galaxy A7, Samsung continues to offer high-quality display output which is crisp and full of colour.

The phone gets a unibody design but even then, Samsung manages to offer microSD slot for storage expansion which most phones are deprived of these days.

Samsung Galaxy A7 has got the looks of a premium smartphone.

And finally, the inbuilt battery is capable of powering the phone for over 15 hours on a single charge. That’s not bad for a phone which also boasts Samsung’s display prowess.

Samsung has yet to learn from its mistakes on the TouchWiz software. The Galaxy S series may have benefitted from a stable Android version, but for the Galaxy A7, things have gone back to square one.

The UI is sluggish, goes AWOL, and leaves the user in a spot of bother, especially during calls. The inconsistency is so regular that after a few weeks of use, we adapted to the phone’s patchy performance.

The Exynos processor that powers the Galaxy A7 is barely able to match the likes of a Snadpdragon 820 or, for that matter, a Snapdragon 808 device.

The chipset in tow is more in line with the likes of Snapdragon 615 and 652, which is usually seen on a mid-range phone right now. This severely hinders the performance of Galaxy A7, which faces heating issues every now and then.

Samsung Galaxy A7’s camera is good for outdoors, not for low-light. (Photo:The Quint)

Both the cameras on the Galaxy A7 are just about average, and for this price we’ve come to expect better. The back camera is good for clicking pictures in broad daylight, not so much in low-light. The front selfie camera is good for quick snaps, but that’s it.

And finally, we think that Samsung has shot itself in the foot with the pricing of Galaxy A7. You can actually buy the Galaxy S6 for around 34K in the market right now, which has a better camera, hardware and even software. So, would anyone think of buying the Galaxy A7 just because it is a 2016 model? We’ll leave that to you.

Samsung leaves us with no option but to suggest that the Galaxy A7 2016 would have been perfect in 2015, that too at its current price. But in 2016, we’ve come to expect better (and more powerful) things at mid-range price points.

Also, one has to consider that the Galaxy S6 is priced a shade higher than the Galaxy A7 2016, which doesn’t leave Samsung in a good spot. On the whole, Galaxy A7 2016 is mired by its sluggish software, underwhelming hardware and average cameras for the price.