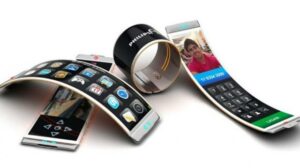 If any device in the universe exemplifies the advantage and tireless march of Moore’s law it is the smartphone. This tiny pocket-sized computer now provides the functions of five or more devices over twice its size just five years ago. A handheld digital still camera is one example, a video recorder is another, general purpose computing using a PC, a media player, a fax machine with scanner, and a radio and TV receiver. It even goes beyond that to embrace new development platform capabilities such as TV gaming, augmented reality, and virtual reality. We carry our boarding passes, we buy things online, we pay for transportation and other goods without ever touching our wallet, and we monitor our health with this amazing little device, and it is amazing not just because of its size and functionality, but it’s also amazing for its affordable price. Smartphones will drive adoption of virtual and augmented reality

With a simple headset adapter we can use our smartphone to whisk us away to exciting, fantastical, and even accurate environments with a full 360° view in real-time high-resolution. Playing games in virtual reality, looking at proposed vacation sites, enjoying an immersive experience in a concert, or examining a potential new dwelling, our VR enabled smartphone can take us to all these places in an instant. Its sensors know where we are whether we are moving or not, where we are looking, and all that while maintaining communications with the Internet.

Stick a smartphone in a headset and you’ve got an affordable, untethered VR HMD  (Source: Samsung) For more immediate and possibly life-threatening requirements our smartphone can be used as an augmented reality device and help doctors remotely diagnose, first responders get around obstacles, and weary travelers find their way and understand menus. Although these ideas have been discussed for years it’s only been in the last two years that they have been fully implemented and available to everyone. 3-D and low light capture

The cameras in our phone have been expanded from one, to two, and now three or more image sensors.

Project Tango will have three cameras (Source Google) The additional sensors also allow our phones to see, measure and record depth. The world is no longer flat but now can be captured in honest 3-D and later used for viewing and/or 3-D printing.

You can capture and literally print what you see (Source: Google) We can take photographs of anything we see, we can take our own photograph, and we can combine that in the teleconferencing mode so that we can see our correspondent whilst they can see us as well.In order for this range of image capture and processing the sensors and the electronics behind them have to be able to discriminate at very high resolution, 4K or greater, the differences within a scene in lowlight conditions. That’s easy to say but extremely difficult to accomplish and requires a level of precision, speed, and memory capacity unthinkable two years ago; this truly is the epitome of the realization of Moore’s law and innovations in image processing and mobile SoC design. Personal ID

The idea of a cashless society, a frictionless transactional society has been the fantasy description of science-fiction stories for years. That vision has arrived and is being experienced by millions of people around the world.You can be picked up at your home in a private car driven to the train station get out of the car without conducting any transaction, other than to perhaps say thank you to the driver, walk into the train station, purchase a cup of coffee, and then walk to the railroad platform to wait for your train. You never took your wallet out of your pocket, or anything else for that matter and yet all the necessary tariffs and fees were taking care of and correctly and accurately logged into your accounts. If you had been boarding an airplane instead of a train you would’ve had to take your phone out of your pocket and show it to the infrared scanner at the gate, but that’s all you would’ve had to do. Likewise if you are shopping in a department store and were making a selection you have to take your smartphone out of your pocket or purse and wave it at the cash register or sales clerk’s terminal. Not much of a delay in your busy schedule, not having to remember passwords, or sign unwanted paper receipts.

NFC can work directly with Bluetooth equipped terminals (Source: Cnet) Your smartphone knows who you are. It can tell by looking at you, it knows your moves and characteristics, and as a backup for or critical authentication it has a biological sensor that you can use with your fingertips. Once the smartphone has determined it’s you, it’s able, if permitted, to communicate with other transactional systems. And it never stops learning about you. Everybody changes over time, their hair color changes, they lose hair, they may grow beard, they walk slightly differently, and change their interests and tastes in material goods. The phone never stops learning about you and how you are changing and it appropriately uses, and when necessary shares, that information, all for your betterment. Perceptive assistant

The sensors in your smartphone record your physical activity, can measure your heart rate and breathing rate, can listen to you so as to be ready for your slightest command, and can even be an additional set of eyes for you as discussed previously with regard to augmented reality. The smartphone never stops being your assistant. But it’s more than just a mechanical assistant it’s an intelligent assistant learning your tastes, tracking your movements, and assisting you in your daily life Free of wires

Imagine being free of wires. Imagine your smartphone being a wireless, hub for all connected devices, docking, and TV – with Web GL and TV gaming.

Freedom of movement and ease-of-use effectively means that there are no encumbrances, no tethering, no cabling, and no annoying hooking up with wires. Imagine a scenario where you come home and place your smartphone on the coffee table in your living room. The moment you do that the coffee table starts to charge the phone making up for any power you used during the day. You pick up a game controller and you say to either the TV or the phone, “Turn on TV, bring up Sky Rim, launch game.” The smartphone immediately recognized the controller through its Bluetooth connection turned on the TV and established a multi-gigabit 802.11ad communications link between itself and the TV, contacted the web provider where the game Sky Rim resides, and launched the game. Friction free, very fast, approaching the speed of thought Thanks to the multi-gigabit, high capacity connectivity of 802.11ad which enables the lag-free docking and screen mirroring, and near instant access to multimedia, etc. We truly live in amazing times.

Think of all the applications that became possible with mobile broadband – video and music streaming, access to cloud storage, photo and video sharing on social media, and live video broadcast. In fact, many of them became practical only with the advent of 4G LTE technology. So it’s clear that providing a smartphone with an ever faster, more ubiquitous connection to the Internet opens up the possibilities for new apps.

But if we make the mobile connection so fast, that it approaches the speeds of fiber optic wired connections? Then we could have not just streaming video, but streaming 360° video for an immersive VR experience. We could have not just cloud backup, but rather cloud storage that acts as a nearly inexhaustible extension of the smartphone’s storage. Never has a connection speed proven too fast for an application to arise and take full advantage of it. That’s why faster connections speeds are needed more than ever in the smartphone. And with LTE Advanced Pro, the latest generation of 4G LTE technologies, gigabit class speeds are now possible on mobile devices – to say nothing of what will become possible with 5G.

How To Market Yourself Online

The Birth Of Gigabit LTE: Your Next Phone Could Be Supercharged!