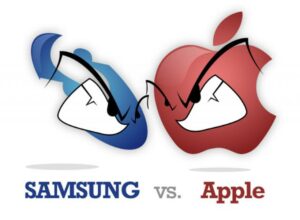 One day after Apple’s big iPhone 6s event, Samsung points to the world, that there is something the Galaxy can that the iPhone can’t.

It is no secret that Samsung is one of Apple’s biggest rivals in the smart phone business, their lawyers have met so often in court that they would normally be having a family BBQ together every second weekend. Despite being a major iPhone parts provider, Samsung couldn’t help trolling Apple’s presentation via Twitter, and to round things up, the next day, the Korean company started an ad campaign, dissing their rivals, Titled “It’s not a phone, it’s a Galaxy”. In recent months, Apple had an ad campaign Titled “If it’s not an iPhone, it’s not an iPhone”, what a coincidence.

In the ad, Samsung makes it very clear that the Galaxy phones have wireless charging, but guess what, the iPhone doesn’t. The two companies have a long history of media rivalry, like Coke and Pepsi used to have, constantly making fun of the other in their ads. You can take a look at the commercial here, and have a laugh even if you are an iPhone fan.