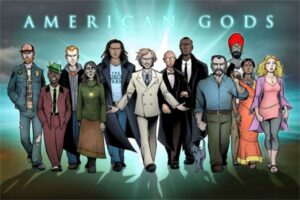 American Gods is a Neil Gaiman novel, centered on a mysterious character called Shadow. The book tells the story of how Shadow, involuntarily, gets sucked into a war between mythological gods of the past and their modern day counterparts, who have risen from our obsession with money, media and drugs. It is a surreal road trip through modern day America, with an unorthodox approach to gods and belief.

In 2011, HBO had shown interest in adapting the novel to a TV series. Gaiman started work on the script, announcing new elements and details for the opening episode and that the book would only make up for the first two seasons. Gaiman and HBO could not reach common ground on the script. In 2014 HBO revealed that they had abandoned the project because “Some things just don’t happen”. In the same year Freemantle Media acquired the rights to adapt the novel to a TV series and announced that Starz will develop the series with Bryan Fuller and Michael Green.

Fans will already know Fuller from Mockingbird Lane, Pushing Daisies and most recently, Hannibal. Fuller’s latest announcement, that the Hannibal director David Slade is also on board, might reconcile fans who were disappointed that the series has been canceled. You never know, he might even get Mads Mikkelsen to play Mr. Wednesday.

That a director has been chosen gives hope that the project will soon be realized. Apparently Gaiman will not be writing the scripts but is “very involved”. He has given permission to take the story beyond Shadow and Mr. Wednesday, incorporating Anansi Boys, another Neil Gaiman novel about an African spider-god’s sons,  which will also be adapted to a mini TV series by BBC.

Starz has officially given its OK for the production of American Gods and Bryan Fuller estimated that the series could be aired in late 2016. That sounds very optimistic since the casting has only recently started with no official names mentioned, but the project is getting off the ground and there will be more to report in the coming weeks.

The title illustration is from http://www.erik-evensen.com/