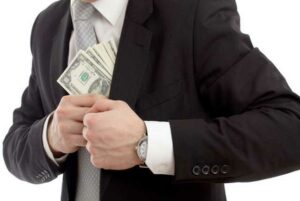 Yesterday the FTC and the FCC announced that Verizon and Sprint are the latest carriers to get caught cramming customer’s bills with bogus charges. The companies will be forced to pay a combined $158 million in settlement payments.

It has become quite clear over the past few months that pretty much every major phone service provider is dishonest and that they have all been cheating their customers for years. And it’s not just charging outrageous rates. That wasn’t enough for them – they wanted even more.

So they all have been adding bogus charges to customer’s bills – charges for services that were never ordered or authorized. They routinely charged customers for things like horoscopes, ring tones, sports news, screen wallpaper and celebrity gossip. Then they took up to 35% of those charges for themselves (I strongly suspect that Verizon, Sprint, AT&T and T-Mobile also own the companies who supposedly offered those ‘services’ so, in effect, they got all the money).

Here’s the breakdown (so far):

Customers who suspect that they were fraudulently charged for services they did not request can go to the respective company’s websites for details on how to submit a claim. But don’t expect much. Certain customers will only get a one-time payment of $7 or less and everyone else will split the remainder of the money set aside for restitution once all the claims have been submitted. And since the deadline to submit claims to Verizon and Sprint is December 31, 2015 don’t expect to see a dime until sometime in 2016.

AT&T customers have already missed the May 1, 2015 deadline for filing so unless you’ve already filed, you’re out of luck.

So all four of these major companies have been cheating their customers for years and it has taken major fines from the FTC and FCC to get them to admit it and (theoretically) stop doing it in the future.

Sigh. I seriously doubt these fines are going to change anything. These companies are basically run by monsters who have absolutely no integrity. They get stopped today but they will just start doing it again tomorrow (or they’ll just come up with some other way to cheat their customers). As I’ve pointed out before, all these companies made much, much more money off these scams than the fines they incurred so what’s to stop them from doing it again and again and again?

10 myths (and some truths) about Apple