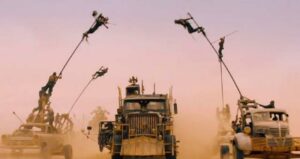 While it’s taken a long time for Mad Max to come back to the big screen, it was apparently worth the wait because the reviews have been stellar, and one website even tells us Fury Road “might be the best action movie of the last 10 years.”

That claim comes from Uproxx, who also reviewed Mad Max by telling us it “doesn’t let plot or dialogue get in the way of a damn good time.”  In addition, the site tells us that it’s gotten a 99% approval rating on Rotten Tomatoes before the movie even hits the theaters.

As director George Miller told writer Mike Ryan, his approach to effects in the movie was “old school. It was real vehicles, real people and real desert.” It also moves at a much faster pace than The Road Warrior, which had 120 cuts in 90 minutes, and Fury Road has 2,700 in two hours. “But movies have gotten quicker. We are speed-reading movies now.”

Then again, a movie that’s essentially a big, long chase scene should never be slowed down, and again, it’s great to learn that the new Mad Max really delivers and could end up being the real big hit of the summer.

X-Men Gets a New Spin Off