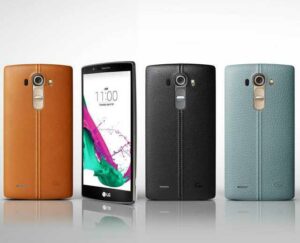 LG just released their new G4 smartphone with a beefed up 16 megapixel camera, real leather backs and a $765 price tag. Sure it has a 5.5-inch, 1440 x 2560 pixel screen, replaceable battery and a microSD card slot so you can add more storage than the included 32GB, but is it really worth the price? If you’re into techno-bling it probably is.

The thing that struck me about the new G4 as I read through the coverage on the web and the stories about how it compares to the Samsung Galaxy S6 Edge ($780) and iPhone 6 Plus ($750) it occurred to me that even though no one really needs to spend $750 or more for a smartphone people seem to be snatching them up as quickly as they can be released.

I believe the reason people are spending so much money for a device that could easily be replaced by something costing half as much (the One Plus One with 64 GB storage costs $348.) isn’t because of the technology or the screen size or the number of megapixels. It is because people believe that these devices represent who they are.

They are fashion statements. They are displays of wealth. They are elite representations of success.

The Apple Watch is a perfect example of this.

Like pricy smartphones, no one really needs an expensive watch even if it does have a lot of built-in technology that no one aside from Chester Gould (the creator of the Dick Tracy comic strip in 1931) could have imagined. Expensive watches (not just smart watches) are for people who want to show off. They want to say to the world that they are abundantly successful and can afford to throw away hundreds or even thousands of dollars on something that is basically jewelry.

You can bet that all those people who ordered an Apple Watch and actually received one in the past few days opened the box with child-on-Christmas-morning excitement, figured out how to turn it on and sync it to their $700+ iPhone, strapped it on and promptly headed out to show it off to the other kids. I’m sure that those folks lucky enough to get their Apple Watch last Friday just couldn’t wait for Monday morning when they could ‘accidentally’ let their sleeves slide up at the office and their coworkers would all ‘oooh’ and ‘ahhh’ and say ‘is that really an Apple Watch?’

I don’t think there is anything wrong with fashion (even though it can be a bit fickle) and I hope that all those people willing to pay big bucks for techno-bling feel like they got their money’s worth out of their devices, but I do think there is a difference between fashion and style.

The Six Million Dollar Man Reboot May Be Coming Together