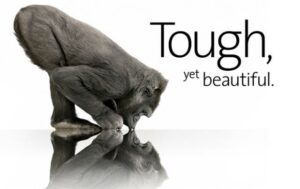 I’m getting ready to go on vacation and I’m going to be driving our Supercharged Infiniti for about 9 hours and I noticed the damned replaced windshield is chipped again.  My new Jaguar has also had its windshield replaced once as has my older one and both of them are showing a lot of little chips which get really annoying when the sun is coming up or going down.  Gorilla Glass, now coming out in its third even harder form, is used in most expensive smartphones because it is so tough and while Apple looked to replace it with Sapphire they just couldn’t manufacture it reliably and it turned out to be way to brittle for a bendable phone.  Though I think it’s likely it is too brittle for any big phone because all of the large ones flex a little.

Now Gorilla Glass is used in the amazing new i8 but only in the panel between the engine and passenger compartment because, on top of being stronger, it also does a better job of blocking sound.

I figured that someone must sell a windshield made of Gorilla glass and I’d pay extra for one I didn’t have to replace so often.  I ran into this video by the guys that do the Myth Busters TV show and in the second half they showcase how much better a windshield with only one layer of the glass would be.  If hit by a large object the windshield, which had the gorilla glass on the inside, didn’t spray glass into the eyes of the folks in the front seats.   Now that would be an impressive value but I wonder why they put it on outside given it should resist chipping much better though, granted, you’d be back to having the risk of glass shards on the inside.

Ok then why not create a windshield that was entirely made of gorilla glass?  Likely because it would be too expensive but you’d think companies like Porsche, Mercedes Benz, Lexus, Infiniti, Acura, and Rolls Royce (not to mention the super car companies) could likely market the advantages and justify the cost.

Now they wouldn’t just justify it on safety (suddenly I’m wondering why I didn’t think of Aston Martin because James Bond would definitely go for this option) but on its other benefits.  It’s much lighter, it is (as BMW discovered) better at deadening sound, and it is more flexible.  This last makes it not only more resistant to chips and safety hazards but much harder to break through keeping the car’s contents much safer.  Something else a much more expensive luxury or performance car might want.

Wrapping Up:  The Glass Age

While I was watching the video on the Gorilla Glass Windshield I noticed another one that introduced “The Glass Age”, it is a follow on to one of my favorite videos “A Day Made of Glass”.  In this video buildings, tables, walls, and tablets are made of transparent glass that transforms to show information, protect our privacy, and transform the world into an ever more visual place.   They are cool videos that showcase to a large extent what we’ll likely see more of next decade and I think we’ve only scratched the surface with regard to what glass will be able to do now that we can bend it and make in nearly impossible to break.

I’m still looking forward to the time when our views can be dynamically changed to reflect any place in the universe real or imagined.  Wake up in the morning to grazing horses or unicorns, an ocean or Martian view, or the world as it did or will exist.   At some point we’ll break free of reality and glass technology will be at the heart of getting us there.   Granted, right now, I’d just be happy if my next windshield didn’t need to be replaced quite so often.

Are You Ready For Self-Driving Cars?