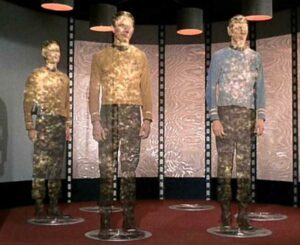 Apart from the fact that transporters aren’t likely to become a reality during my lifetime there are some other reasons why I would never use one.

Like Bones on Star Trek’s early episodes I would be more than a bit reluctant to step up onto that platform and have my molecules torn apart with the hope that they can be reassembled somewhere else.

It’s not because of those horrendous accidents that the TV series occasionally showed (or didn’t actually show in most cases) where there was a malfunction of the machinery or a stray magnetic storm messed things up.

My main objection to taking one of those shimmery rides is that even if everything worked correctly I don’t think I would actually survive the trip…at least not the original me who stepped onto one of those circles.

Let’s assume that a transporter like the one in Star Trek operates a bit like a sci-fi version of a 3D scanner at one end and a 3D printer on the other. A person (or thing) gets onto the transporter and they are scanned, probably much deeper than at a molecular level. The 3D model of you is sent to the destination where a souped-up 3D printer builds a replica of you.

Now I’m assuming that the printer at the destination uses local atoms to ‘print’ the person and that the person’s original atoms are not torn into pieces and sent to the printer where they are reassembled. If you could send the original atoms then there wouldn’t really be a need to tear everything apart in the first place (but perhaps that’s how they will work eventually).

Now even if the printer could build a perfect replica at the destination and that replica somehow sprang to life, complete with the original person’s memories and thought patterns intact, that doesn’t explain what happens to the original person at the sending end. Based on watching numerous episodes of Star Trek I assume that the original person is basically disintegrated (and I assume their atoms are later used to 3D print other people or things).

So you step onto the transporter, zap you are disintegrated, a copy of you is 3D printed at the destination and since that copy has all your memories it believes that it is the original you and takes over living your life. You die and your copy takes over.

But I don’t believe who you really are gets transferred anywhere, who you are just gets copied. It may be a perfect copy but it’s not the original you. From the copy’s point of view everything went fine but from your point of view the world just ended.

It almost gets down to the idea of a soul. Even if you are able to copy every single atom in a person is your soul contained in those atoms? And even if the soul is simply a side effect of our thought patterns would it be captured by the scanner and transmitted in a 3D model? Or would a transporter simply make copies of our souls along with our bodies? And finally, what if the 3D scanner at the sending end didn’t disintegrate you at all. Would another you pop into existence at the other end complete with a copy of your soul?

Something silly to think about this weekend.