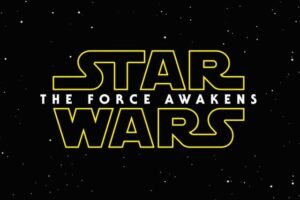 After a flurry of rumors hit the web, it’s now official: The trailer for Star Wars: The Force Awakens will debut this weekend at select theaters.

The trailer is reportedly 88 seconds long, and the Hollywood Reporter tells us it will play in thirty theaters in the States. Disney also promises the trailer will be “seen in theaters around the world this December.”

There’s no word as to what movies the trailer will be playing before, the Reporter tells us it’s “attached to all movies” in the thirty theaters it’s currently scheduled to play in. When the trailer for Episode One was ready, Fox made a big deal of it, because it played before the movie Wing Commander, and they needed the trailer to bring in audiences to what was a dreadful movie. (It indeed increased ticket sales, and there were fans who bought a ticket just to see the trailer, then they left.)

So finally we’re going to see a bit of the new Star Wars, and we’re looking forward to seeing even this tiny snippet, and hope JJ Abrams can bring the franchise back, big time, next December 18, when the Force Awakens explodes in theaters.

Why I’ll never use a transporter