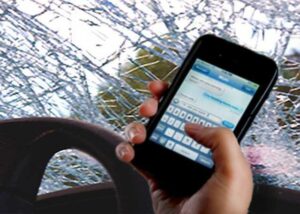 Why exactly do people text and drive even though they know it’s dangerous? A new study from the University of Connecticut Medial School has found that even though 98 percent of over 1,000 people surveyed said they realize texting and driving is dangerous, 74 percent of the same people admitted to indulging in texting activities while behind the wheel in spite of that.

Most people admitted to glancing at their phone, reading text messages or texting while sitting at red lights or stop signs but 43 percent admitted that they had read messages, 34 percent glanced at their phone and 27 percent actually composed and sent messages while driving.

Dr. David Greenfield, a professor at the university who helped conduct the survey said, “There’s a huge discrepancy between attitude and behavior. There’s that schism between what we believe and then what we do.”

He compares texting to a form of compulsion. When people receive a text, the alert could trigger the brain to release dopamine due to excitement. When people find out that the content of the text is appealing, their brains release even more dopamine, causing them to want to look at the messages in general.

Unfortunately the researchers believe that in order to overcome this texting compulsion people have to first acknowledge that there is a problem and that’s not likely to happen.

I believe that beyond the dopamine theory there is another factor here that ties back to the fact that nearly a third of the people surveyed had the attitude that ‘sure it’s probably dangerous for most people to text and drive but I’m different. I can text and drive at the same time because I’m smarter than everyone else.’ Which is basically a variation on stereotypical teen invulnerability misconceptions that ‘bad things happen to other people but nothing bad is going to happen to me.’

And you can add ‘I need to text and drive because my texts are more important than other people’s texts.’

But I would challenge every person out there who still texts while driving even though they know it’s dangerous – have you ever sent or received a text while driving that resulted in a million dollar deal? A text that saved someone’s life? A text that made a real, tangible difference to your friends or family. A text that simply couldn’t wait until you pulled over?

And finally, have you ever sent or received a text while driving that was more important than your life?

Dell And the Future of the Desktop