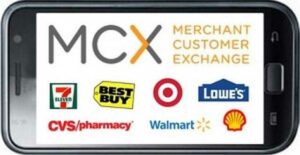 In a statement yesterday Walmart said they have no plans to join Apple Pay.

Walmart, as well as Target, 7-Eleven, Best Buy, Lowe’s, Southwest Airlines, the Gap and Shell gas stations to name a few, are instead putting their considerable muscle behind a competing system called CurrentC.

CurrentC is similar to Apple Pay in that no credit- or debit card information is transferred during a transaction (or if it is it is accompanied by a uniquely generated, one-time-only authentication code).

The primary difference is that Apple Pay relies on Near Field Communication (NFC) technology embedded in their newest iPhones. A customer just has to wave their iPhone close enough to an NFC sensor to be detected and then the user authorizes the purchase with a fingerprint scan.

When a customer wants to make a purchase with the CurrentC system the CurrentC app creates a type of barcode, called a QR code, that can be recognized by most check-out scanners already in stores. The system doesn’t require retailers to install NFC sensors, so it’s much less expensive to implement.

But the biggest difference is the fact that CurrentC works with any smartphone, not just the newest Apple iPhones.

So even if the new Apple iPhones are wildly successful it will still take many months before even a small percentage of the public owns one.

Now other smartphone manufacturers may begin to put NFC chips into their devices just because Apple has done it and they don’t want to miss out on any potential markets (or they simply want to match Apple feature for feature to be competitive).

NFC payments may become all the rage and become the dominant card-less payment system. Apple has quite a few major banks on board already. But Walmart and Target combined make one heck of an impressive eight hundred pound gorilla and if they want something they can usually get it so it’s quite possible that CurrentC will become the card-less payment system that wins out.

Apple should be held responsible for the iCloud hacks