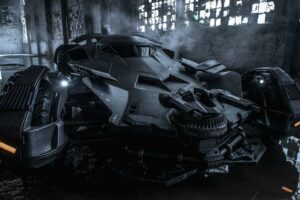 Yes, superhero teams are the hot thing because of The Avengers, and Avengers 2, which is coming next summer, will certainly be a huge event. Not to mention superhero teams are hot because Guardians of the Galaxy is the biggest movie of the summer. Still, there’s danger signs everywhere, especially the casting of Ben Affleck as Bruce Wayne, and director Zack Snyder, who’s certainly no Christopher Nolan.

So now that B V F is getting made, the Batman costume and the Batmobile pictures are out there, and here’s a picture of the new model Batmobile if you haven’t seen it yet. In all fairness, we think it looks pretty cool actually. As much as we love the Chris Nolan Batmans, the Batmobile seemed kind of odd to us, more like a Bat Hummer.

Now that you’ve seen Batman’s fly ride, is it a good omen to come, or will it be one of the few good things about Batman Vs Superman? Thoughts?

Walmart not buying into Apple Pay