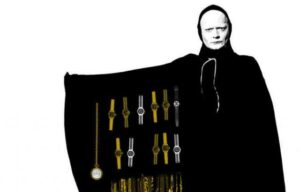 Samsung’s Gear S features a 2-inch, Super AMOLED, curved display with a 360 x 480 resolution. It also has built-in GPS and doesn’t need to be tethered to a phone in order to receive calls, messages, etc. It runs Samsung’s Tizen OS on a dual core 1.0 GHz processor with 4GB storage.

The LG G Watch R (say that one three times fast) has a 1.3-inch P-OLED Display with 320 x 320 resolution. It runs Android Wear on its 1.2GHz Snapdragon 400 processor with 4GB of storage. It will also be water resistant for 30 minutes to a depth of one meter. Other features have yet to be announced.

Both watches will start shipping in various markets over the coming months.

And if you haven’t already heard the rumors that Apple will be unveiling some sort of smart watch too, then welcome back to planet earth. Right now, all we have are rumors about what an iWatch might look like or what its capabilities might be.

Smart watches have been popping up here and there over the past few months but none of them have set the world on fire. In fact people have been avoiding them in droves.

Some say it’s because they are too large, clunky and geeky for most people and that style is the primary reason people buy one watch over another. And let’s be honest here, all you really need from a watch is the ability to tell time and look nice.

Others say that the new smart watches aren’t selling well because they are difficult to operate – the displays are just too small. It’s a catch-22 in a way, if you make the screens large enough to accommodate even a tiny touch screen then the watch looks overly large on your wrist, but if you make the screen as small as a traditional watch face then there isn’t enough space for even a few controls.

Personally, I think it may have more to do with expectations. People want a smart watch to do all sorts of things – make and receive calls, text messages, etc. like a phone (without having a phone in your pocket). They also want it to track their heart rate, galvanic skin changes and keep track of how far they’ve walked (and calculate calories burned). They want it to store and play music and videos. They want them to predict the weather, give stock reports, activate lights when they enter a room and unlock their car when they approach. They want a watch that can run for days or even weeks without charging.

And they want them to look like an expensive piece of jewelry.

Oh yea, it has to tell time.

Of all these requirements it seems like the Samsung Gear S might be closing in on meeting most of them (the screen is still a bit big). Perhaps it will actually attract people’s interest. Then again it could be yet another smart watch that most people won’t want to wear.