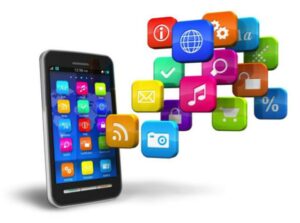 A new report by Comcast reveals the state of the US app market and while some facts are understandable others may surprise you.

The mobile economy is driven by apps. Everything from Uber to WatchESPN plays a role in driving greater engagement and reliance on smartphones.

Comcast thinks that this means mobile is not growing at the expense of the desktop but it is hard to see how you can argue for the desktop with the bulk of digital media time moving so quickly to mobile. Ad dollars, the money, is going to follow the eyeballs to mobile, even if it hasn’t done so so far.

What is most surprising is the fact that 7 out of every 8 minutes on media consumption on mobile is driven by app. Comcast’s is reporting that 88% of mobile phone time is on apps versus browsers, and on tablets that figure is 82%.

But, how are users using their apps? Well, at least a third of US smartphone users are downloading at least one app a month with the average being 3. But, what may leave some cause for concern is that the top 7% of users are accounting for 50% of the download activity in any given month.

That doesn’t really bode well for engagement and user acquisition for marketers because their market of users is effectively a very small percentage of the total user base. Great user base but if you want to get them on board with you the vast majority may be only had through a very small channel.

And the numbers in the report bear this out because 42% of all app time is spent on one single app and 75% of the usage time of apps is confined to an individual’s top 4 apps.

That’s also a tough situation if mobile hopes to attract more ad dollars because that requires marketers to vie for the same eyeball time on the same platforms driving prices higher for those top 4 apps and pretty much making it suck for everyone else.

But, the most interesting stats is the median annual income of smartphone users: iPhone app users earn $85,000 a year, 40% more than the median for Android users’ $61,000.

The median household income in the US is about $51,000 according to the US Census Bureau so, it is quite clear that smartphone users are wealthier than the average American household, and iPhone users fall into the top 25% of earners.

What Android lacks in big bucks users it makes up for in numbers. Android smartphones have 83.8 million subscribers compared to iOS with 16.4 million subscribers. So, you could argue that the Android median income numbers are more statistically representative of the general population and that Apple’s users just skewer higher, perhaps because Apple sets a premium on its pricing and distribution.

If I were going to put my money into marketing to a mobile audience, I’d aim for Android users with my apps and my money. The iPhone may have the better cachet and the more affluent user but I need numbers. I am trying to reach a group of people that probably don’t do more than one or two app things with their phones and I like my odds when targeting 83 million people versus 16 million.

But, marketers do like bright shiny objects so you always see the iOS version of an app first before you see an Android version. Of course, sometimes that is more of a technology decision: developers like to target iOS because they have a very fixed platform so they know that they can guarantee a unified experience straight out the gate on iOS devices. There are only so many. With Android, they have to settle on a set of target devices, and the market is fragmented so, harder to create that singular experience across all devices. However, as Android devices get better that argument is going away.

As for app usage, it is heavily entertainment based. Half the time people are on social networks, games, or listening to streaming radio. However, iPhone users are more focused on consuming media, but the presence of Gmail and Google Search integrated into Android means that those users are spending a greater share of their time on Gmail and Search.

And it shows in the top apps that Comscore ranked in its report. The branded apps of Facebook, Google, Apple, Yahoo, Amazon and eBay account for 9 of the top 10 most used apps, 16 of the top 25, and 24 of the top 50.

Facebook is kind here in terms of both audience size and amount of time it is used. Entertainment, messaging and social networking is highly concentrated among younger users while more mature users tend to do things like email and maps.

None of the probably surprises you because it is consistent with your own app usage. Nevertheless, the obvious ways in which we all use smartphones and apps means that there are a handful of big brands that act as sentinels for anyone wanting to reach a mobile audience. This isn’t the same as the desktop and there are possible issues with the trends namely, the cost of customer acquisition for marketers is going to be higher on mobile, once they start to spend their money there.

But, there isn’t much choice. Mobile is where the audience is going.

Forget the statistics and do what makes sense