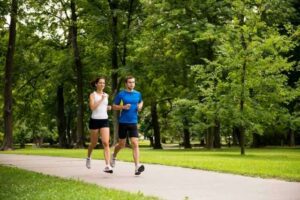 Health, media and dating apps are in high demand across the UK, according to a new report.

App analytics and market data firm App Annie has pulled the covers off this summer’s big digital trends, and the story is a fairly predictable one.

With the World Cup and Commonwealth Games (and while the weather remains pleasant) the nation appears to have gone – at least temporarily – fitness mad.

The 30 Day Ab Challenge, an app in the iOS store, demonstrates the extent of the trend, climbing over 70 places in the rankings over the last few weeks.

The only other time of year where I hear this many office workers babble on about their “awesome fitness regimes” and “healthy new lifestyle” is during the first fortnight of every year. I’m going to go out on a limb and guess that the inspiration will run dry fairly soon.

Also largely driven by this summer’s major sporting events is the rise in downloads of news apps, including those developed by the Guardian and Telegraph. This also reflects the growing demand for media on the go.

The report also shows that dating apps, such as Match.com and Zoosk, are enjoying a period of high popularity, as consumers get into the spirit of summer.

“The June UK Index tells us that Brits are certainly enjoying themselves this summer,” said App Annie EVP of marketing, Oliver Lo. “Finding love and getting in shape were both big themes for June, and we saw a huge jump in broadcast news apps around the World Cup. Improved network connections and apps with rich, on-demand content are allowing Brits to take fun everywhere and enjoy it as they please.”

Is Amazon losing its grip on the cloud?

What would happen if U.S. tech firms turned off the lights?