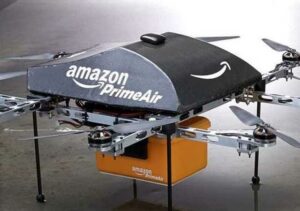 While many people think it is little more than a publicity stunt Amazon has petitioned the FAA for an exemption from rules barring it from testing drones as possible delivery devices.

According to current FAA rules private citizens are allowed to fly drones (within certain guidelines and local restrictions) but commercial organizations are not allowed to fly them outdoors.

According to Mary Osako, a spokesperson for Amazon, “Current FAA rules allow hobbyists and manufacturers of model aircraft wide latitude in flying their sUAS [small unmanned aircraft systems] outdoors. Because Amazon is a commercial enterprise, we have been limited to conducting R&D flights indoors or in other countries.”

Amazon has already conducted some tests using custom-built drones that weigh less than 55 pounds, fly no more than 400 feet above the ground, can reach speeds of up to 50 miles per hour and carry packages weighing up to five pounds. That weight limit covers 86 percent of products Amazon sells.

The company is asking the FAA to let it carry out extensive testing on company property, under the direction of a licensed pilot or someone who at least has passed FAA-required testing for pilots.

The tests would be carried out in the U.S., and there would be a number of safety measures in place, such as geofenced barriers preventing the drones from staying active outside a physical zone.

“Granting Amazon an exemption to allow R&D testing outdoors in the United States is in the public interest because it advances Congress’s goal of getting commercial sUAS flying in the United States safely and soon. It is a necessary step towards realizing the consumer benefits of Amazon Prime Air, which will deliver packages to customers in 30 minutes or less,” she explained.

“We’re continuing to work with the FAA to meet Congress’s goal of getting drones flying commercially in America safely and soon. We want to do more R&D close to home.”

I’m not sure if this drone delivery project will ever get off the ground (sorry) but it’s a fun idea and it would probably be in the best interest of the public if someone did some legitimate testing of these devices for commercial purposes. Perhaps the best compromise would be for the FAA to grant Amazon permission to test drones in exchange for sharing the results of their tests and perhaps allowing other companies to test drones at the Amazon facilities.

Blu-ray vs tape: Which storage technology is best for your business?

Ultra-Fast 5G Wireless Is Coming And Will Be Totally Different