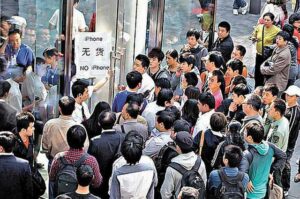 On Friday Chinese state media broadcaster CCTV warned that the iPhone’s ability to track the user using its positioning technology could reveal “sensitive data” and even “state secrets.”

The television station alleged that even if people turn off the ‘frequent locations’ function in Apple’s iOS 7 mobile operating system, which records time and location for the owner’s movements, that data could still be sent back to Apple and might be shared with U.S. security agencies.

The security and spying accusations against U.S. technology companies has been picking up momentum over the past few months and China has begun to criticize more and more companies and products it believes may be used to spy on citizens and high ranking officials. The U.S. has also been accusing Chinese officials of hacking U.S. websites and warning people that products produced in China may be used to spy on U.S. citizens.

A lot of these accusations and threats stem from Edward Snowden’s infamous revelations of world-wide spying conducted by the NSA and other governments. The leaked papers also show how technology companies either worked directly with the NSA to share data or in some cases, how the NSA installed custom chips into computer systems that that would allow them to monitor the devices.

Unfortunately the accusations aimed at Apple and Microsoft are among the first real-world examples of how the actions of the NSA are beginning to have a negative impact on companies trying to do legitimate business in other countries. They have created an atmosphere of distrust around the world and that is costing U.S. companies money.

It is unfortunate that whenever something like this pops up our government (or the press) are quick to mention Snowden as if it was all his fault. Even President Obama used Snowden as a scapegoat when German Chancellor Angela Merkel confronted him over spying issues. He apologized for Snowden’s revelations, not so much the fact that it was the U.S government and the NSA who did the spying.

I hope that somehow U.S. companies can once again gain the trust of countries around the world so that we can continue to do business with them, but it will probably take a while and it doesn’t look like our government is going to stop spying on people anytime soon.