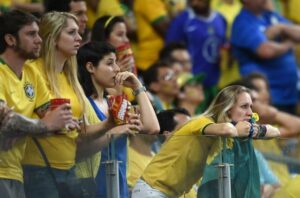 The 2014 world cup in Brazil has been a record-breaking tournament, and Germany’s stunning semi-final demolition of Brazil emphatically continued this trend.

Not only was it Brazil’s biggest defeat in their World Cup finals history and the first time a team have scored seven goals in a World Cup semi-final, but it also broke records off the pitch on social media site Twitter.

The match became the most talked about sports game ever with 35.6 million tweets as well as reaching a record-breaking peak of 580,166 tweets per minute (TPM).

When this peak is compared to those of previous events, the growth that Twitter has experienced in recent years becomes clear.

This is, of course, all part of a battle to become the most popular site for discussing the latest television shows and events, which is currently a two-horse race between Twitter and Facebook, where global events such as the World Cup are used to showcase online and mobile ambitions.

Twitter’s chief media scientist Deb Roy certainly believes they lead the way, “Twitter makes television better. It is in fact a force multiplier that can enhance the impact and possibilities of television.”

Chinese TV says iPhones are a threat to national security