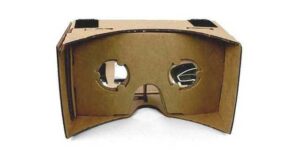 Along with the other announcements at Google’s I/O developers’ conference Google handed out Cardboard, a do-it-yourself VR headset kit made from – you guessed it – cardboard.

The kit contained pieces of pre-cut corrugated cardboard, two lenses, magnets, two strips of Velcro and a rubber band. All that the users had to do was to put it together with their Android phone in the middle of it and voila! A fully functional VR headset that looks about as cool as most of the other VR headsets out there.

The kit was created by two French Google employees during the free time that Google gives to employees to work on whatever they wish. The kits that Google handed out during the conference also came with an SDK so developers could start building their own apps for the – what would you call it? A device? Contraption? Tongue-in-cheek joke?

Attendees at the conference seemed to think that the Cardboard kit was pretty amusing and I don’t think that anyone thought it was anything more than a gimmick. Not a serious product designed to compete with other VR headsets.

It was, however, a clever way to introduce some new software technology that could be used to create applications for more expensive VR gear, whether manufactured by Google or not.

Google begins to erase the past