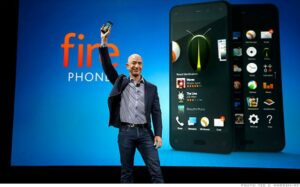 For weeks, Amazon teased the tech world with sneak peeks of its debut smartphone. Last night, the company finally bared all.

The Fire Phone has arrived, and it’s caused somewhat of a stir. The build-up to the launch was dominated by suggestions that the handset would pack a few features that could help set it apart from the rest of the competition, and the rumour-mongers have been proven right.

The headline feature of Amazon’s new device is definitely “dynamic perspective”, which uses four front cameras – that track your eyes and mouth – to create a 3D effect. Also on board is Firefly, which acts like a digital shopping assistant. Again using the camera, it is able to identify objects around you (like a dress) and add them to your Amazon shopping cart.

ITProPortal’s full review of the Amazon Fire Phone will be up on the site in due course, but here are our early impressions.

Alysia: It’s no secret that the smartphone market is saturated, dominated by established industry leaders Apple and Samsung. On home soil, analysts say that 70 per cent of UK consumers already have smartphones, and the remaining 30 per cent will probably stick to simple feature phones – none of these flashy 3D cameras and biometric technologies, thank you very much.

So Amazon really needed to pull something special out the bag with its smartphone debut, and while the Fire Phone certainly has some nifty features, can we really call it a game changer? Sure, the 3D screen enabled through four front-facing cameras is technically impressive, but it smacks of gimmick rather than revolution.

Not only that, by launching only in the US, Amazon has limited the scale of developers who may wish to build apps for the new operating system. As we’ve seen with Windows Phone, fewer apps can be the death of a mobile device – especially for the younger generation of smartphone enthusiasts. The Fire Phone may have been years in development, but it still has a long way to go.

Aatif: Must try harder. The Fire Phone looks like a decent handset, but I’m not exactly bowled over by its supposedly “killer” features. While I’m sure it will amuse some people happy for a few days, the 3D functionality just reminds me of those collectible cards you could find in cereal boxes back in the day – I think I might still have a Jurassic Park one hanging around somewhere.

The mobile is far too gimmick-heavy for me. Sure, Firefly might make your retail life a little easier – and it will definitely help fill Amazon’s pockets – but it won’t change your life. As for this gesture control stuff, it’s all been done before. I’d have been much more impressed by a battery capable of lasting at least two days.

Paul: Amazon had a huge opportunity to make big waves in the smartphone industryw ith this phone launch, but it seems to have somewhat blown its chances. While some innovative features have been included, the Fire isn’t likely to appeal to consumers at its current premium price point. A company with Amazon’s capital should have seen the benefit of offering a decent phone for a budget price, but instead it’s opted for a more high-end device that doesn’t look remarkable on paper when compared to the much better value Nexus 5, for instance.

While flashy gimmicks might impress, consumers are still after the same thing: better battery life, low price points and larger screens, and the Fire hasn’t delivered on any of these fronts.

Tom: I’m the resident iPhone user here at ITPP Towers, so being a bit of an iOS snob, it takes quite a lot to impress me phone-wise. I’m liking the look of the Amazon Fire Phone though. Whereas in my opinion many Android phones lack an attractive interface, Jeff Bezos’ new baby looks great. The menus look clean, professional, smooth and responsive. No complaints about the 4.7in screen size either.

Considering the Fire Phone’s link with Amazon Prime music (newly launched alongside the phone), speaker quality is important, and the dual stereo speakers should offer a decent listening experience. Since Bezos has very much billed the device as a way to enjoy Amazon entertainment services, a decent screen resolution and sound quality is important, if I am to gain a TV-like experience from it. The model’s average screen resolution is worrying in this respect. Its claimed 65-hour audio playback is great though.

Equally worrying is the phone’s Fire OS – a heavily modified version of Android OS – since app development for the platform may be slow, and this could irk many users used to the variety offered on other leading models.