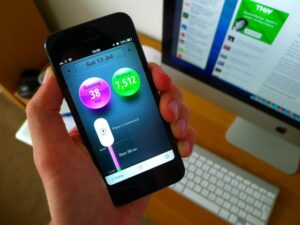 Apple’s got HealthKit, and Samsung has Sami. Now, Google is set to launch Google Fit. Every one of these companies is aiming to create means and methods for applications to collect, share, and use data from wearable devices for health-related purposes.

This significant move into the aggregration of health-related data is Google’s direct challenge to updates made by Apple at its WWDC to iOS 8 that included the HealthKit framework. Google is planning to launch Google Fit at its own developer event, Google I/O, at the end of June.

At least hte wearable device makers can feel confident that every platform they are targetting is providing them with an effective framework to build the applications that they need to add value to their data tracking services. The biggest problem with fitness trackers, for example, is that they provide data but lack context and applications that truly help users take advantage of that data. So, they tend to get used for a few weeks and discarded.

Wearable device manufacturers have to create better applications to support their devices. Google and Apple want to make sure that their respective platforms are the first place they will go to for support in that aim.

Google Fit will aggregate data through open APIs, instruction sets that allow apps to share information, and will also announce partnerships with wearable device makers at its I/O conference, Forbes understands. One source with knowledge of Google’s plans said Google Fit would allow a wearable device that measures data like steps or heart rate to interface with Google’s cloud-based services, and become part of the Google Fit ecosystem.

Google wants to search from the heavens

Building a mobile app? Users needed to be engaged and fast