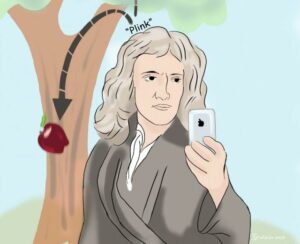 Every month or two somebody kicks the rumor tree and, like Newton predicted, Apple rumors fall. This time it’s the same old, bordering-on-tedious ‘Apple will be shipping a smartwatch any month now’ drivel yet again.

This time the slight variation on the old rumor is that Apple is gearing up to ship three to five million smartwatches sometime in October and it will sport a curved OLED (organic light-emitting diode) display and include sensors that collect health and fitness data.

That’s about it folks. No specific sources were quoted (unless you count the dozens of articles about the smartwatch quoting each other), Apple, as usual, didn’t comment and to be honest nobody knows anything more specific about the silly thing than they did the last time the rumor was talked about.

It’s been a while since the term vaporware was coined back in the ‘80s. The famed Video Toaster from NewTek was announced and demonstrated and raved about a full year before they actually managed to ship one.

Software companies routinely talked about features (and fixes) that were going to come out in upcoming versions and behaved as if those promised features already existed. Back when I was Editor-in-Chief of AmigaWorld magazine I had companies call me up and complain about negative reviews when our authors found problems in their software. They would claim that the review was unfair or inaccurate because they were planning to fix those problems in the next release.

I would politely tell them that we were reviewing the product that they were actually shipping and couldn’t review a product that didn’t exist yet. If they released a new version that fixed the old problems then we would print an update but until that time the review would stand as is.

Somehow they didn’t think that was enough.

Dos Owls’ ODIN is a small projector with an Android brain