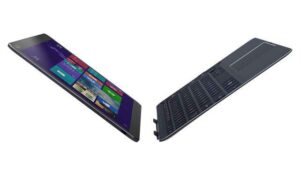 Asus apparently can’t decide where to place its bets these days so it has decided to bet on all of them. Earlier today the company showed off their Transformer Book V, a device that combines a smartphone running Android with a Windows tablet. The smartphone slides into the tablet allowing users to switch between operating systems at the touch of a button.

Getting a jump on the competition Asus unveiled a slew of new devices the day before the Computex trade show opens in Taipei. Among the devices is a new Transformer Book V – a Windows/Android hybrid device that includes a 12.5-inch Windows 8.1 tablet with a dockable phone running Android 4.4 and a detachable keyboard.

Exact specifications, pricing and shipping dates were not announced and there is some speculation that the device may never see the light of day. Asus had previously announced the Transformer Book Duet TD300 an Android/Windows hybrid earlier this year but then scrapped the project (some say because of objections from Microsoft and Google).

Pressing on into more traditional uni-OS lines, Asus also showed off the Transformer Book T300 Chi, a 12.5-inch tablet that has an attachable keyboard. The device is 14.3 millimeters thick in laptop mode, and 7.3mm thick as a tablet. It has an unspecified Intel processor, 4G LTE support, and a 2560 by 1440 pixel display.

The company also announced two new versions of their MeMO Pad Android tablets in both 7- and an 8-inch sizes. Both tablets will host Intel Atom quad-core processors.  The MeMo Pad 7 should start shipping in Taiwan starting on June 6.

Finally, the company announced another tablet dubbed the Fonepad 8. It has an Intel Atom Z3560 quad-core processor, a 1280 by 800 pixel IPS display and 3G connectivity to make phone calls.

Asus seems to be taking a ‘let’s try a little bit of everything and see what works’ approach these days and I don’t think that’s such a terrible idea. In a market that is flooded with tablets, smartphones, fablets, convertables, laptops and all combinations thereof it is increasingly difficult for manufacturers to differentiate themselves with a single, stand-out device. However, if you manufacture dozens of variations in all shapes, sizes and price points you have a better chance that one of them will appeal to buyers. The problem is, however that the broader you spread your product line the lower your return on investment will be for each device.

We’ll just have to wait and see how many of these devices actually make it into the stores and how well they sell.