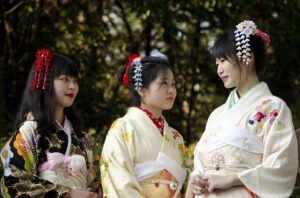 But who are “Comfort Women?” Beginning in 1910 to 1945, Japan colonized Korean Peninsula, during this period, many Korean women and girls were forced into sexual slavery by the then Japanese Army, and according to the surviving comfort women stories, the experience was brutal. In December 2015, Prime Minister Shinzo Abe and the ousted Geun-hye reached an agreement to “finally and irreversibly” solve the comfort women problem.

Japan has fulfilled part of the December 2015 agreement. For example, Japan disbursed over $9 million to South Korea’s fund in charge of the victims of the ordeal who are still alive. Also, Japanese Prime Minister Shinzo Abe is well aware of the saddening comfort women testimonies, and he is remorseful for the pain and suffering they experienced.

However, South Korea is yet to fulfill its part of the bargain. An offensive statue, according to Japan, is still present in front of the Japanese embassy in Seoul yet in the agreement the figure is supposed to have been demolished. In fact, a similar statue was installed in front of the Japanese Consulate in Busan. South Korean Foreign Ministry, is planning on launching a task force to review the process that culminated in the infamous agreement. The move is likely to be welcomed by over 70% of South Koreans who expressed their disapproval of the agreement.

The discussion about the deal comes in the wake of increased threats by North Korea to the two countries. Stockholm International Peace Research Institute and other analysts indicate that North Korea’s short- and medium-range missiles are now able to strike South Korea, Japan, and some U.S military bases including one located in Guam. The two countries are likely to sideline their standoff as they work together to safeguard their national security interests. For instance, on June 3, 2017, the two countries agreed to retain General Security of Military Information Agreement.

In the joint pursuit to tame North Korea’s nuclear threats, the U.S has been a supportive partner, but questions have been raised concerning China’s commitment. Recently, the U.S President, Donald Trump, vowed to support Japan and South Korea in piling pressure on Pyongyang. Also, in June, U.S. Deputy Secretary of State John Sullivan while with Vice Foreign Minister Shinsuke Sugiyama stated the importance of South Korea resolving her row with Japan for the two countries to work amicably against North Korea. However, China has failed to impose strict sanctions on North Korea. Also, China thwarted South Korea’s efforts to use Terminal High Altitude Area Defense (a U.S defense missile defense system) by imposing economic sanctions on South Korea.

Many international experts well versed in foreign affairs have expressed their opinions regarding the agreement. For instance, Brad Glosserman, an executive director of a Hawaii based think tank, believes that President Moon is working towards finding a solution that is likely to be welcomed by South Koreans. He adds that since Mr. Moon is the president, his sentiments, as a private citizen before the elections are beneath national interests. Scott Snyder also of a U.S think tank states that although South Korea and Japan have a standoff over the agreement, it is highly unlikely that the standoff will hinder their mutual interest to curb North Korea’s missile and nuclear development.

Top 4 Reasons Why You Need to Get Fitbit Fitness Gadgets