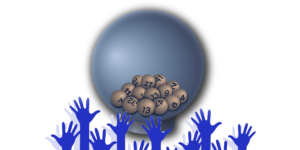 Charities in the UK are struggling. Over the last decade, they have lost more than £3.8 billion in government grants and this has led to a number of high profile collapses. One of the UK’s leading drug and alcohol treatment charities, Lifeline, shut down earlier this year, Kids Company closed in 2015, while 4Children collapsed in 2016.

These shortcomings have been largely influenced by the growth of mobile technology and social media. Charities have been forced to change the ways in which they connect with supporters and the way funds are raised. On top of this, public attitude towards traditional, intrusive tactics from charities such as cold calling and emailing has stiffened. Many charities have been forced to change tactics, moving towards the sale of products and services to the public in order to raise cash.

Charities taking online donations has more than doubled in the past year according to the Lloyds Bank UK Business Digital Index 2016. However, the report also found that fewer than 60% of charities have their own website, while just 44% use social media to interact with supporters. Many charities also admitted to relying on volunteer skills, with 72% confessing that they had not invested in digital training for staff.

However, forward-thinking charities are recognising the need to go digital, and are looking for various ways to connect with supporters and raise money. There is even a dedicated Charity Digital Toolkit available to help UK charities navigate digital transformation. The kit covers the basics of going digital, including mapping an audience and developing a digital strategy, understanding the benefits of digital marketing, and how to effectively measure success. This can in turn help them understand how to effectively launch and market campaigns online in order to raise the maximum amount of money.

Lotto betting is growing in popularity for charities

Lotto betting is gaining traction as one of the most efficient fundraising methods for charities of all sizes. Marie Curie and the North West Air Ambulance have opted to offer lotto betting to supporters, as has the charity branch of Arsenal FC which uses funds raised to help disabled athletes and open football camps for children in impoverished areas of Zimbabwe.

Lotto betting is not the same as buying a lottery ticket, rather it is betting on the outcome of a lottery draw. Entrants can pick numbers as normal, however prize winnings are paid out differently. Lotto betting websites operate an insurance model which means that each bet is insured. Smaller prizes are paid for using revenue from betting sales, while larger jackpots are covered by the website’s insurance model. This allows lotto betting sites to offer enormous prize sums, often matching those of official lottery operators.

Lotto betting is an attractive fundraising method for charities as set-up costs are handled by the lotto betting provider, who also cover the design and marketing for the charity. Supporters simply place a bet through the charity, who keep the revenue, and the prize money is guaranteed through the insurance model rather than the charity. This allows charity supporters to donate to their charity of choice while also giving them the chance of winning big themselves.

As the government continues to cut funds for UK charities, big fundraising campaigns are becoming crucial for their survival. Digital fundraising is one of the easiest ways charities can encourage donations and in doing so generate funds, but in order to do this charities must first realign themselves and develop strategies that will flourish in the digital age.

How to Pack Fragile and Heavy Items for a Moving