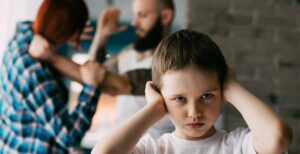 Increasing awareness about domestic violence so that the signs are recognised early is an important step for preventing this type of relationship to escalate and be accepted among people in Australia’s society. Educating abusers and the abused that these actions are not socially acceptable behaviour and that they have long term effects on their partner and extended families.

Half a billion dollars has been committed by the Victorian Royal Commission into family violence to help save and change lives for the better. The funds will be used to primarily help women flee abusive relationships, as well as intervention and prevention.

In 2016, the Victorian government partnered with behavioural change agency The Shannon Company to launch a campaign that would raise awareness about abusive relationships and the avenues victims could seek to find help.

Addressing the common issues that cause family violence.

Early parenthood and alcoholism are other factors that contribute towards family poverty, which ultimately leads towards domestic violence.

Another factor is a clash of personalities. Differences in people’s habits or lifestyles can often trigger people to vent in a controlling or an explosive manner.

It’s important to recognise these issues and seek support particularly if they escalate to heated verbal exchanges or violence.

Bad things happen when no action is taken.

What also needs to be factored in is how the community can help. It’s one thing for the victim to reach out to the right networks for help, but it’s another thing for people to take action if they can see signs of abuse in their community. Are victims showing fresh bruising? Or are there constant arguments being heard from afar? Doing something is better than doing nothing at all.

No deaths should be tolerated and together we should stop family violence. Educating people about behaviour that is not socially acceptable, recognising the problems and having avenues to help those in distressing situations is a positive step. It might take another generation or two to change the mindset, but the actions that are implemented now will benefit Australian society in the future.