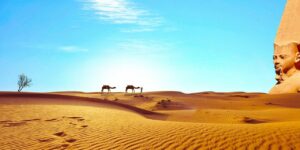 Egypt has always had the power to turn any dream into reality. This country is filled with the best examples of natural and man-made miracles that make a vacation truly worth remembering. The time spent in Egypt will make you feel as if you have entered paradise and see the meaning of true beauty. In this article, you will learn the reasons that make Egypt an ideal place to visit and explore.

The ancient Egyptian civilization dates back to about 5000 years which makes it the oldest civilization in human history. It had a profound impact on humanity and was the first to innovate. The history of ancient Egypt is divided into three time periods; the first is Egypt old kingdom (2686-2181 BCE) where pharaoh Narmer “Menes” became the founder of the first dynasty in 3200 BCE plus some of the biggest constructions and immortal architectural wonders were created such as Giza pyramids complex that holds the great pyramid of Giza, the last remaining one of the great seven wonders. Then rose the middle kingdom (2000-1700 BCE) which had a grand innovation in art design & culture but the country fell under the control of a foreign force called the Hyksos, but Egypt in new kingdom(1550-1077 BCE) was freed from the Hyksos and the centralized political control was restored, which lead to the construction of some of the most enchanting, ever-lasting temples in the immortal cities of Luxor and Aswan under the reign of great rulers like Hatshepsut, Akhenaten, Ramses II and many more. The ancient Egyptian civilization was able to take one step further to mankind using their intellect and creative imagination to make useful contributions towards language, numeracy, medicine, architecture and science, all for the purpose of understanding the realm we occupy.

Across the ages of ancient Egypt, many great kings and queens ruled this holy land and created a legacy with their own hands all across the country for the purpose of gaining the blessings of the gods. They believed that one day they would join the same deities they worshipped in heaven. So many great constructions like the pyramids were created to touch the skies and even knock on the gates of paradise plus many temples like the Karnak temple, Luxor temple, Abu Simbel, Hatshepsut temple and countless more for that purpose. They created the mummification process to achieve immortality and filled their tomb with everything they could ever need in preparation for their ascension.

A Nile Cruise between Luxor & Aswan is like being on board a celestial journey sailing across a river filled with pure wonders. Going on a Nile cruise gives you a chance to get a glimpse of heaven, explore the unforgettable allure of its banks and listen to the echoing tales of the glorious past. It can provide tourists a great way to have fun and enjoy the finest service. Your time will be worth spending as you will get the chance to create beautiful memories.

The one thing that Egypt excels more than any country in the world is the number of tourist attractions that come in the different types and shapes such as the wonders of Cairo like the Giza pyramids complex that hold the great pyramid of Khufu, the last intact of the Seven Wonders and the Great Sphinx, the oldest and biggest statue in history, the Egyptian Museum that holds more than 120,000 rare genuine artifacts, the golden brick road Khan El Khalili Bazaar the oldest market in the Middle East, the glorious Cairo citadel, Ben Ezra Synagogue, Amr Ibn Alas mosque, the hanging church, Ibn Tulan and various more.  In Luxor, the greatest open-museums in the world are a collection of immortal monuments such as the heavenly Valley of the Kings, the divine Karnak temple, the beautiful Hatshepsut temple and the colossal Colossi of Memnon and more. The golden city of Aswan is the home of the Nubian culture and contains the temple of Isis Philae, the temple of Horus Edfu, the unfinished obelisk of Hatshepsut, the modern Aswan High Dam and the temples of Abu Simple of King Ramses great (1303–1213 BCE) to celebrate his victories and everlasting legacy. The gem of Mediterranean Alexandria has always been beautiful pearl containing the finest example of Greco-roman artifacts like the catacombs the Pompey pillar plus the Islamic citadel of Quitbey.

There are a number of great beaches and coastal sites that showcase what coastal beauty should be like. Within every resort, like Hurghada, is a vision of angelic beauty created by the divine to bring peace and tranquility to whoever comes across it. One of these natural wonders is the magical city resort of Hurghada which gained the reputation as the finest tropical destination in Egypt filled with every possible desire and every means of entertainment. The marvelous resorts of El Gouna, Marsa Alam are a wonder beyond description that highlights the meaning of tropical beauty in the most classical fashion. Also, the Sharm El Sheik is at the edge of the holy land of Sinia offers a unique reflection into the recreation tropical wonders of Egypt.

The nation of Egypt houses one of the kindest people of the earth who would welcome a complete stranger with open arms as a member of his own family. The Egyptian people are known to be generous and peaceful who stay by your side no matter what. You will find a smile every step of the way and will feel as if the entire public is at your service.

RIFT by ILCoin: How Enterprises Can Benefit From Adopting Blockchain