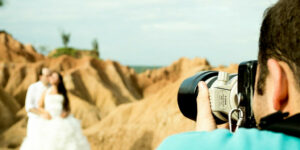 In the age of social media, digital photography, and digital editing, it’s clear that photography in general and how we share the moments captured in pictures has changed. When it comes to wedding photography, there are clear distinctions on the habits and preferences for couples today compared with couples in the past. Capturing a wedding in photography or art has been part of society for thousands of years, but recently with the rise of digital technology, there are more ways than ever to memorialize weddings in the way you want.

It seems like every wedding now has a specific hashtag. Sometimes, these hashtags are created and used well before the wedding, such as for engagement announcements or during pre-wedding events such as a shower. People expect things like this in order to contribute to the group feeling and the group energy of the event. Additionally, social media has become a staple for engagement announcements. Whether it’s a photo from the actual proposal or a photo from an engagement photoshoot, couples use social media platforms to make their announcement to family and friends.

With the rise of digital cameras, photographers are able to take thousands of pictures without fear of running of out film. Now granted, there is always the risk of running out of battery, but that’s a separate issue. As long as photographers bring enough memory cards, there is almost no fear of missing out of a key moment due to not having space. Wedding photographers usually take between 500-1000 photographs during the big day, according to a survey from the custom framing company Framebridge. Without having to deal with film and constantly changing rolls, that give wedding photographers far more opportunities to do their jobs.

The topic of digital editing and airbrushing is one that comes up quite a bit, usually in the world of fashion and modeling. However, it’s something that’s become a trend for wedding photos. According to Framebridge’s survey, Nearly one third (29%) of respondents said they had their photographer use Photoshop on their wedding photos. Millennials, however, had the highest response rate of any age groups. They are twice as likely to use Photoshop than other generations. It’s clear that if a wedding is going to be the biggest day of your life, people want to look their best even if it means a little touch up on the computer.

New technology continues to hit the market each day. Outside of the technological improvements in the cameras and video equipment themselves, the world of photography has changed rapidly in the last few decades. With the rise of digital photography, editing software, and social media, wedding photographers have more options and more freedoms but also more expectations. Only time will tell how new advances will change the high-demand field of wedding photography.

6 Men’s Grooming Tips For A Clean And Pleasant Start

5 Facts You Didn’t Know About Freezers