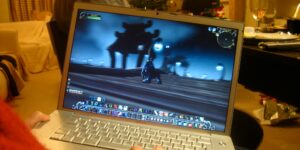 Although playing video games is a relatively recent phenomenon, it’s activity that’s taken over the whole world and it is showing no sign of slowing down.

A recent report revealed that 63% of all American households contain at least one frequent gamer, and it seems as though gaming is attracting more than the stereotypical teenager.

Instead it seems as though the average ages of gamers in the US is 35 for men, and 44 for women. And as the demographics for modern day gaming have changed, we’ve seen the types of games being developed change accordingly.

As well as the endlessly popular first-person shooters, there’s been a real growth in everything from open-world role-playing games like World of Warcraft to quick and simple puzzle games like Color Switch.

These have been aligned to the rise of smartphone culture which has meant that half of the world’s population currently has the option to play anything from Pokémon Go to Minecraft in the palm of their hand.

This proliferation of mobile devices has had many unexpected outcomes on our gaming habits. The multiplayer aspects of modern online games has meant there’s been an endless range of strategic titles like Clash of Clans, and what’s interesting is how these games typically employ a ‘freemium’ model that allows people to initially play without it costing them anything.

Such an approach can be seen in recent successes like the Ballz puzzle game who use free pricing and simple gameplay to become an incredibly easy way to fill in a few minutes whilst out and about.

The ease with which online games can be played has meant that it’s even affecting some of our more traditional games and sports. The eSports phenomenon has seen professional video gamers emerge, whilst dedicated sports broadcasters like ESPN have recently started to cover competitive gaming.

And although Lucky Nugget Casino have revealed that Japan is still resistant to the online gambling revolution, many other parts of the world have found that an increasing number of people are now using smartphones and tablets to play casino games rather than heading to traditional gaming establishments.

For a long time, Japan’s Nintendo held off joining in the online gaming phenomenon. But seeing as the company ended 2016 with the record-breaking success of the Super Mario Run mobile game, it seems as through there are now very few places that online gaming cannot reach.

How to Setup A VPN Service on Your Android Device