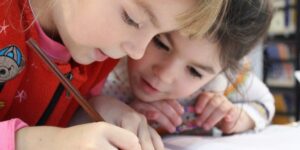 Older generations complain about the time children seem to spend surrounded by electronic devices like smartphones, televisions, tablets, computers, gaming consoles and so on. Despite labelling it as a ‘generation gap’ by today’s parents, there is a degree of truth worth to be considered behind such vivid defence of yesterday’s parenting methods.

From expecting better academic performance from children these days to the significant impact constant exposure to digital life can cause to their health and development, let’s analyse what technology is producing to our children’s life.

From imagination to virtual reality

I think we can say that circa 15 years ago, children expected days as Christmas with the anxious thrive of seeking their presents like a fairy-tale story. Toys being given those dates were, often, gender-guided (dolls for girls, cars for boys, though that rule wasn’t precisely strict), and most commonly intended for boosting children’s imagination at the time of playing. These days we are accustomed to children writing down in their Santa’s Letter things like tablets, high-end smartphones, PlayStation consoles, iPods and so on.

If we put PlayStation consoles aside, perhaps the most prominent changing factor relies on being gifts intended for one person, and not something to be shared like what could be a common children’s toy. This not only proves that technology is slowly leading a path towards massive consumption but also to isolation, as children don’t seek peers for playtime, but they replace such physical company with what technology can provide.

The impact on healthy lifestyle

Another common aspect in which grandparents today complain about children’s lifestyle is related to the time spent outdoors, not only playing with other kids but also enjoying a breeze of fresh air.

The purpose of outdoor at early stages of their childhood is for helping them to develop their senses, contribute to improving motor development, risk-taking actions and also inducing a great deal of physical exercise in a playful way for avoiding issues as children obesity. Outdoor games also help children to understand the world in questions as simple as how do plants grow, why flowers smell that way, enhancing their vocabulary and setting grounds for fundamental knowledge on geographical and meteorological factors.

Also, valuable lessons can be acquired on their physical and emotional capabilities, getting awareness of potential issues like vertigo, health conditions as asthma, how to handle frustration in public ambiences and so on.

Eyesight problems in early childhood once ruled out biological causes, are directly linked to digital overexposure during the ages of 2-6, either via television or tablets/smartphones as we usually see children engaging so actively these days.

When children grow up so fast!

Finally, there’s something that ‘modern parents’ tend to label as overreacting and is the content children are exposed to during an average day. There’s a reason behind parenting control setups for children, and it goes linked with a higher exposure to sexual-related scenarios in television, slang vocabulary, not to mention adult-meant conversations. Given the fact adult’s conduct easily influences children through the early stages of their lives, prolonged exposure to these elements not only ends up holding bad behavioural patterns but also inducing future depression or self-esteem issues to be addressed.

Fortunately for us, digital technology manufacturers are aware of the impact produced by their goods, introducing means for what’s labelled as ‘parental control’ under many devices. Most likely you have spotted these warnings when some movies show T or M rated content, but filters as these can also be applied to content available through the internet, video games, social media platforms, online gaming among other examples. We can check some interesting data on this behalf at this infographic courtesy of Ooma.

As you can see, technology not only help adults to change the way they live their lives but also shapes children development, even under scenarios we yet don’t acknowledge as worth considering. It’s our duty as adults to be constantly in touch with what’s going on in their intimate world as the best way to ensure whatever they face in common day life is apt to their emotional and rational capabilities.

How to Choose a Mobile Hotspot