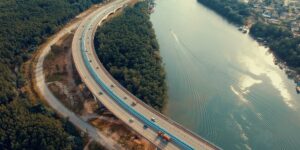 It’s no secret that water is among the most important resources that we need. Food, shelter, sunlight, and (for the modern individual) internet access are a few others. Every settlement since the Bronze Age has relied on water sources, often settling near rivers and lakes. It’s as blunt as the fact that we simply cannot live without water — and potable water even more.

And water is needed for a good reason. It helps us keep cool during hot days; it also serves as an important component to any cleaning solution. Water also helps our bodies transport nutrients to vital organs. Water is used to keep our machines cool and sometimes, even to power them. You could say that our society runs on water, and to lose a steady supply of water could severely impair the functionality of a community.

That’s exactly what happened on December 14, 2016 in Corpus Christi, Texas. In an industrial section of the area, millions of gallons of Indulin AA-86 and hydrochloric acid leaked into the city’s water supply. In response to this water contamination incident, the local government declared a ban on the use of tap water throughout the city.

This ban lasted for two days, and as a result businesses were stifled, schools were closed and many residents were forced into panic-buying of bottled water. The problem here was that the public water supply could not be disinfected by boiling, freezing, and filtering. About 85 percent of the city was affected by the contamination.

While the government did its best to disseminate the warning as quickly and as widely as possible, there were those who were unable to heed the warning in time. These people were advised to seek immediate medical attention.

According to the OSHA Hazard Communication Standard, Indulin AA-86 is a hazardous substance and direct exposure to it will lead to eye irritation, skin irritation, burns, severe respiratory tract irritation, and serious gastrointestinal damage.

The contamination was so severe that up until January 2017, there was no clear solution to the problem. What was known however was the culprit of the incident — the Valero Energy Corporation.

Now, I am a firm believer in taking precautionary measures. There are many things that can cause a particular area to lose its water supply. Severe storms, tornadoes, droughts, war, earthquakes — these can all deprive an entire community of its water supply. This is why it’s always wise to have emergency supplies in place.

As my old man liked to put it:

“Better to have it and not need it, than to need it and not have it.”

Here’s a list of the supplies you need that could help you survive a calamity.

It’s also a good idea to get your things labeled. Not only does it give visual proof of your ownership over the object, but it also helps you organize your supplies during times of strife.

Custom labeled bottled water is a great way to help identify your supply from that of others. From the perspective of relief distributors, labels also serve to help prevent the misuse of relief goods (as is the case wherein monopolists hoard supplies and sell these supplies when they should be free to begin with).

Whichever the case is, in an emergency situation it’s always wise to keep your supplies organized.

Why song and dance are essential for children’s development