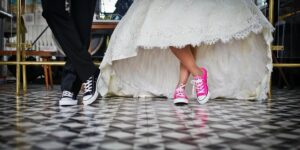 The wedding industry will never die. It’s almost as common as food, water, and shelter, with marriage being something we’ve done for hundreds, if not thousands of years. As noted by the CDC, there are approximately 2.1 million marriages per year, a significant number to consider when analyzing the general populous. However, while weddings will always be a constant, everything surrounding them has changed significantly.

When you break it down, weddings can be an incredibly complicated industry. What was once something you either consulted with your friends and family about has now transformed into having thousands of resources all with different prices, information, and suggestions. This can be somewhat overwhelming, as well as leaving a lot of couples with a hefty bill at the end.

This doesn’t have to be the case. With so many changes going on in the industry, everything is shifting for good, from how people are buying to bringing down the average costs. Here’s how:

One of the biggest changes that has come about in the past few years is how much wedding buying has shifted online. While before, the trend was to visit someone like a wedding planner or contacting every venue, dress seller, or DJ yourself, everything has blossomed to become a one-stop shop. And for those looking to get married, this is a win-win.

When you break it down, the internet has changed every facet of the wedding process. The planner has been replaced by companies like Borrowed and Blue, “an Airbnb for weddings” that raised an outstanding $7 million last year. Additionally, things like buying bridal gowns have shifted as well, with makers like Azazie offering the same custom-fitting process of a tailor for half the price online. Yes, the industry has not only become much more accessible, but cheaper as well, completely changing how the cost comes into play.

While this might sound mind boggling to you, the numbers are speaking otherwise. Consumers are becoming much more educated on what to buy, and how that cost can be cut down.

The Average Cost Can Vary Greatly

We see all the time that the average wedding cost comes in around $30,000, which is a pretty staggering figure for most newlyweds. However, as an analysis by Slate notes, those numbers aren’t always accurate. In fact, their report puts the average closer to $18,000, more than half of what some report as the mean.

The way they came to this figure is a larger reflection of how most couples look at getting married. Quite simply, a lot of vendors try to utilize “average costs” as an excuse to jack up the prices on amenities or things you’d otherwise not even consider (I.E: a cake cutting fee). This can all be trimmed down by being frugal, including looking towards other sources for vendors, locations, and services.

For example, renting a private family farm rather than a vineyard or landscape destination could save you thousands, while simultaneously having the exact same benefit aesthetically. No longer are couples going after the same song and dance of yesteryears, they’re starting to get creative with their ceremonies…and for some, this is making them hold off until they have it right.

The average age of marriage has declined significantly over the past few years, with many younger couples taking their time to get married. According to Pew Social Trends, in 2010, 51% of couples over 18 were married, a sharp decrease in comparison to the 72% in 1960. Why is this the case? Well, not only have weddings become more expensive, but social trends have been shifting as well.

People don’t feel as much of a need to get tied down much quicker than they used to, as with how often divorce occurs, a lot of folks want to feel as though they’re making the right choice. Another factor to consider is how much more things like rent and student loan debt are now than in comparison to then, as these debts have affected the quality of living tremendously. And finally, the ideas behind marriage have shifted, with some couples stating that the institution and symbolism of it doesn’t mean as much as it used to.

As weddings have shifted drastically over the years, it’s been interesting seeing how this centuries-old practice has morphed. Who knows what the future of it holds, but for now, the industry is shifting towards more accessibility and finding the best rates. Which, begs the question: what are you doing to capitalize off these trends? Comment with your answer below!

Important Things You Need To Learn About Sunless Tanning

4 ways to Know the Fair Price of a used Vehicle