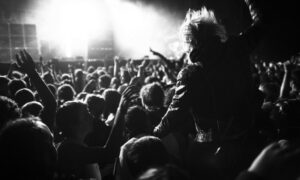 Perhaps nothing has transformed the world of pop music in the last decade more than social media. Its impact has been more momentous than any shift in musical tastes or emergence of any new genre. In many cases, aspiring musicians can now bypass the traditional methods of recording deals and music industry support on their way to popularity. By the same token, the established artists who fail to make it a part of their marketing strategy run the risk of becoming irrelevant.

In many ways, social media has democratized music in much the same way the ability to put music out cheaply over the internet managed to do. Up-and-coming artists can now compete on the same playing field as the industry’s mega-superstars if their social media game is on point.

One such example of this success is Lily Jay, who has built an international following on Instagram of over 300,000 followers. All of those followers will have an instant interest in her hot new single “Renovate,” on which she gets assistance from Mazuradi, an Australian rapper and songwriter, and XY LATU, who recently was a finalist on X-Factor.

Her success and the success of others should help set an example for other burgeoning artists to polish their social media game. Here are some tips how to do that.

When you consider that fans often follow many artists on social media, it only makes sense that the artists who are most active on social media would demand their attention. A common mistake for an artist is to lay low when there is no new music to promote, but that kind of strategy only removes them from the news cycle and allows for others to take precedence in the hearts and minds of music fans.

It’s easy to just post something on social media advertising a new single or album, but not very imaginative. One of the oldest marketing tricks in the book is to make the message be as much about the customer as it is about the seller. That’s why artists looking to make the most of the social media need to incorporate their fans in this process. Giveaways, contests, allowing social media followers access to content that the average fan doesn’t have: These are just some of the ways that artists can leverage their social media output into a bigger, more loyal fan base

It’s Still About The Music

All of these strategies are fine, but an artist who is truly serious about his or her music needs to concentrate on putting out quality music first and foremost. Many artists take so much time cultivating their social media game that they forget to pay due diligence to their music. In that way, they might end up becoming an internet sensation without a valid product to promote.

It’s clear that the power of social media in the music world isn’t going to dwindle anytime soon. That’s why it’s important that the newest class of artists put their social media game at the top of their marketing to-do list.

5 ways to stay in touch with your customers

Covering The Cost Of Elderly Care