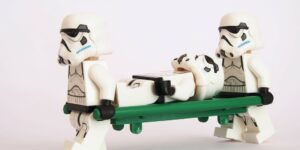 D. Ford was pumping gas one morning at a gas station near her home in Houston, Texas. She went inside the store to pay for her gas, leaving her purse and wallet in the car. A thief stole her purse that contained her driver’s license, credit cards and health insurance information. She did what most other consumers have done in this circumstance – requested all new credit cards, driver’s license and she reprinted her ID card from the online portal. She also filed a police report.

She went about her days as normal until two years later, she received a phone call from a bail bondsman that she was about to be arrested. It turns out that someone has stolen her medical identity and acquired more than 1,700 prescription painkillers at Houston area pharmacies.

The bailbondsman asked, “Would you be interested in paying for your bail now or later?”

Ford was completely overwhelmed as she had her mugshot taken, her fingerprints taken and the police automatically assumed she was guilty because she suffers from psoriasis. After appearing in court and showing the judge a copy of her original police report proving that her identity was stolen, the judge dismissed the charges.

It still took eight years and countless hours of time for Ford to completely clear her name of all the crimes that this other person committed. Debt collectors hounded her day and night even as she tried to prove that she had nothing to do with this debt.

As shocking as this case is, it is only one of more than 2.3 million cases of medical identity theft in the United States. The consequences of Medical ID theft to the consumers is quite high with an average out of pocket expense exceeding $10,000. Furthermore, providers of medical services can find out that previously approved claims are now denied due to fraud.

The Consumer Fraud Protection Bureau and the Office of the Inspector General at Health and Human Services both recommend vigilant protection by the consumer of the information. However, as data breaches become more common, identity theft claims have been rising. Isn’t there a better way to safeguard this information?

Solve.Care offers a comprehensive solution for insurance companies and their consumers. The platform offers a digital ID card that has far greater protections against theft and hack attacks. Also, just by using the platform, insurance companies and providers can realize faster processing times for claims and payments. Consumers and Providers that use the platform have reported greater satisfaction rates over other solutions. This is the reason why they are the top healthcare platform on blockchain.

“Solve.Care is taking all the pain points away from patients and employees serving patients.”

Solve.Care’s system would largely eliminate situations that Ford experienced with her medical identity being stolen. Solve.Care’s digital wallet allows the patient to be securely enrolled into the system. Furthermore, they can easily locate in network providers and book appointments. Eligibility information and referrals are also all contained within the secure digital wallet.

Providers can use Solve.Care’s systems to handle patient coverages and deductibles, fast payment of claims and referral management. Since the system is very secure and reliable, it far exceeds most requirements for the safeguarding of data from hackers.

Given the rising trend of medical identity theft, it is important to safeguard the future against further hacks with the most up to date security and technology systems. Solve.Care is the leading provider of technology solutions in the healthcare space.

Important KPIs for the Telecom Industry