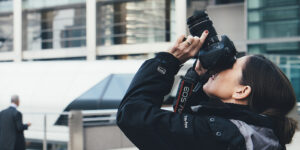 If we’ve learned anything from the growing movement to gender equality, it’s the issues are complex, systemic, and unlikely to be solved overnight. And it turns out even the most vapid of industries suffers from the same malady.

Yes, I’m talking about Instagram influencers. You’ve seen them pop up in your newsfeed time and time again, hawking everything from protein shakes to high end hotels. Beautiful people, beautiful pictures, and a whole lot of reminders about why your life will never be that awesome.

To throw salt on the wound, influencers get paid big bucks to post. The famously rich (or rich because she’s famous?) Kylie Jenner reportedly makes $1 million per paid Instagram post. That’s’ a lot of change for snapping a pic of the latest charcoal face mask or lip balm.

Aside from mega-celebs, there’s a whole economy built around top content creators. These Instagrammers may have as few as 8,000 followers, yet field offers from companies across every industry. These deals are often negotiated in the dark. Brands want to cut down cash payments where possible, while influencers are trying to keep the lights on. Data on their take home pay per post is scarce, which makes it more difficult to set and compare prices.

According to the Pew Research Center, the generally accepted wage gap number is about 82%, meaning that women on average earn about 18% less than men. The same study shows that women age 25 to 34 are better off, earning 11 cents less than male counterparts. That’s for full time employment across the board. Interestingly enough different industries have different gaps between men and women.

While it’s not surprising that the pay gap is pervasive in technology and marketing jobs, it’s particularly suprising to see an industry that is so dominated by women to be dramatically affected.

Many female influencers use Instagram as a supplemental income source

When you have a smaller following you won’t see as many lucrative offers. In fact, if you didn’t get in on the Instagram craze early you might not be able to grow a following at all.

Recent changes to Instagram’s algorithm has made discovery of new content harder. That means you’ve got to hustle extra hard to build a following. Time and money are both required investments if your following isn’t growing.

These factors have led “stuck” Instagrammers to take what they can get, often free product in exchange for a post. Getting a free anything is nice, but it won’t pay the grocery bills. Influencers in this category likely have another part or full time job on the side, and thus would report their per post pay at a reduced amount.

Part of being a good influencer is putting yourself out there. Influencers will often post pictures of their homes, their habits, and bare their emotions for the world to see. It seems right to do in the moment, but can create safety issues for women who confront tough or emotional negotiators.

By following their posts, brands get an inside look at what makes a person tick on a personal level. Women tend to communicate their emotions more readily than men, and may be vulnerable to sabotage in the boardroom.

It’s also extremely uncomfortable to negotiate in a business setting with people who know what the inside of your bedroom looks like. That may add up to a desire for consensus, safety, and positivity over money, leading female influencers to fold quickly and take whatever is offered.

Female Instagram influencers may not have a business background

Many influencers are young. Coming out of a recessionary environment may also mean that many have never held executive positions where negotiation is commonplace.

A lack of practice, as well as a lack of awareness about what a typical corporate marketing budget looks like may lead to miscalculations and mistakes when negotiating fees per post.

Conclusions: So what does it all mean?

While we may never correct the gender pay gap without legislation, transparency can shed light on an otherwise opaque market. By publishing data on pay, Instagram influencers can start to understand how to negotiate better. Similarly brands can be more aware of an unconscious bias, and encourage equal standards for negotiated marketing deals on Instagram.

If you’re thinking about becoming an Instagram influencer as a side or full time gig, you may want to study up on negotiating tactics and pitch techniques. There’s plenty of literature about those topics on the web, and it’s translatable to the situations you may encounter when you are approached by brand sponsors.

Kirill Bensonoff – The Beginner’s Guide to Investing in Cryptocurrencies