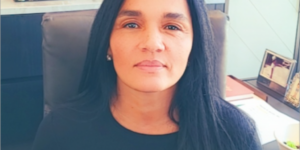 Roc Nation chief executive officer Desiree Perez is one of the leading voices in diversifying the burgeoning cannabis industry.

Perez is leading this work along with Roc Nation founder Jay-Z, one of the many rappers who are invested in cannabis companies. The moves come as cannabis and related substances are increasingly becoming normalized for recreational use as more states legalize marijuana.

For Perez and Jay-Z, the legitimacy of not only cannabis, but also the legal businesses that support it, is critical. It gives the two Roc Nation leaders a voice in addressing some of the racial inequities about the war on drugs and its toll on Black and BIPOC communities.

Desiree Perez and Jay-Z launched their own cannabis company, Monogram, in early 2021. Perez sits on the board of directors of Monogram’s parent company, The Parent Company, a California-based, vertically integrated cannabis business.

Perez has led the creation of a social equity initiative at The Parent Company. The business has pledged $10 million, plus 2 percent of all future net income in a social equity fund.

The fund will be used to find future entrepreneurs of color and provide them with capital and mentorship for success in the cannabis industry. The goal is to build generational wealth and create a cannabis industry that is more diverse and equitable.

“We established this fund to help break down the systematic barriers that Black and other minority entrepreneurs face as they seek to secure meaningful participation, growth, and leadership in this multi-billion-dollar industry,” said Perez, who also serves as The Parent Company’s chief social equity officer, in a recent press release.

“Our vision (is) of a legal cannabis industry in which Black and minority entrepreneurs have the opportunity to build peak levels of success and value for their communities,” Perez said.

Racial disparity in the industry is significant. A 2017 survey by Marijuana Business Daily showed that the industry has only 5.7 percent Hispanic or Latino business owners and founders, 4.3 percent African-American and 2.4 percent Asian, compared to 81 percent white.

The new fund hopes to decisively address those disparities and right some past wrongs. Among the funds initiatives are:

Desiree Perez Believes in the Importance of Storytelling

Desiree Perez believes using cannabis to tell stories of injustice is becoming an effective way to address equity. It’s resonant in Monogram’s messaging. Take, for example, their video, Hypocrisy Stories. The black-and-white narrative features several voices talking about their own experiences that BIPOC faces with minor marijuana possession charges. It ends with the statement, “The hypocrisy of America’s drug policy needs to end.”

The disparities in criminal cases involving cannabis are stark. A 2020 report by the American Civil Liberties Union showed Black people are 3.6 times more likely to be arrested for pot possession than white people are. That rate comes even though usage rates are the same for Black and white people.

In 10 states, arrests of Black people are 5 times those of whites.

Despite increasing rates of legalization, arrest rates have actually increased in recent years, with about 100,000 more arrests in 2018 than in 2015.

Monogram is also advocating for cannabis reform throughout the country.

Desiree Perez and Jay-Z are not alone in using their influential voices to address social injustice. Rappers Method Man and Lil Wayne are involved in similar ventures related to cannabis and social justice.

Desiree Perez was named CEO of Roc Nation, the multinational entertainment firm, in 2019. Previously, she served 12 years as the company’s chief operating officer.

In 2021, she was named a Billboard Change Agent in recognition of her work to fight racial justice. Billboard cited Perez’s leadership of the company’s philanthropic arm, which has supported legal teams involved in high-profile cases, including Breonna Taylor and George Floyd; partnered with the NFL to raise awareness; and collaborated with leading social justice organizations, including Feeding America and Gathering for Justice.