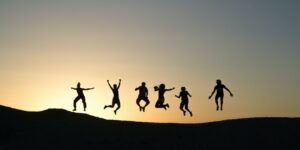 This last week I’ve been recovering from hair transplant surgery which was partially done by a robot. I’ll talk about that once I’ve healed, but the recovery time gave me a chance to do what my sister-in-law and niece have been asking my wife and me to do, and that is watching Ted Lasso on Apple TV+.  In my opinion, it may be the best thing on TV because I believe those who watch the show will become better people as a result. At the same time, I think watching shows like Seinfeld, Cheers, Two-and-a-half-men, Big Bang Theory, and other widespread situation comedy programs use to seek paths that are more likely to make us unhappy.

I say this with some expertise, given all three of my degrees had significant components tied to human behavior and how to manipulate it.  Marketing is the art of manipulation at scale to motivate buying behavior, and Manpower Management is manipulation to increase productivity.  We learn by what we observe in others, and the media we consume molds us, and I’d argue, based on what we see going on in the world, that most media is doing us harm primarily because we aren’t aware of the damage it is doing. The show Ted Lasso is the exception; it is incredibly entertaining and teaches a recurring message that being a good, positive person pays life benefits regardless of the events around us.

It took me a long time to learn this lesson from my Uncle Claud Owens, who eventually taught me the same lesson in the short time we had together.  And I’d like to share what I’ve learned this week in the context of the Ted Lasso TV show on Apple TV+.

When asked to comment on a marketing program, one of the first things I generally say is that perception is reality.  Our reality, what we perceive to be accurate, is created by what we perceive and believe, and often it is both far removed from the truth and from what others near us see and believe. And the most influential person in our lives that can fool us and do us the most damage is ourselves because we want the world to fit our worldview (this is called Confirmation Bias). We are hard-wired to want to appear suitable (Argumentative Theory).  These two aspects of what makes us human also make us, potentially, our own worst enemy when it comes to our choices.

I’m reminded of an event that drove this home for me when I worked for a company called Giga Information Group. We had an annual awards dinner that everyone attended.  I found myself sitting at a table with some of the most attractive and intelligent women I’ve ever met.  Every one of them was divorced because of a cheating husband.  The worst story was that this one woman had taken in her husband’s assistant who was pregnant because her fiancé had left her at the altar, cared for her during the pregnancy and childbirth, only to find out it was her husband’s kid eventually.

Then she later found out that her husband, who had fertility and infidelity as superpowers, had fathered a lot of other children with other women while they were married.   It was so bad the guy would go on trips with his married father to pick up women.  Nearly every woman at that table had a very similar story while not as over the top as that first story. They were fooled by a well-spoken man who told them what they wanted to hear and believed so strongly that they never saw the evidence because they didn’t want to.

My father was like this, and the only reason I didn’t go down this route myself is that I was often left with the women he cheated on, and both saw the damage done to the women and, given I was there when he wasn’t and became a proxy for him, I got most of the resulting abuse.  My father, and people like him, destroyed many lives, but he couldn’t have done this without the help of the women he abused who refused to see what he was.

I think the reason things are seemingly so bad now is that we are, by the programs we’ve been watching, being programmed to accept this kind of unacceptable behavior.

The Unfortunate Trend Of Sitcoms

If you think back at what makes most of the top situation comedies work over the last three decades is that you typically have at least one guy who sleeps around, cheats, and comically weathers the storms that result in messing with the lives of a lot of replaceable women.  They seemed to showcase how much fun infidelity was, that any resulting problems ended when the typically 30-minute show ended and that repercussions were short and easily survived.

A guy that slept around was a lovable rogue, a woman, well, I won’t use that word here, but it wasn’t positive, and I’d argue we’ve been programming guys to be assholes and women to accept being victims since I was a child.  While I doubt the writers intend to make us bad people, that appears to be the result, and it wasn’t until I started watching Ted Lasso that I suddenly got what we need to start doing if we want to make this planet a better place to live.

Ted Lasso has the same elements as other situation comedies, but they are positioned differently.  The hero isn’t the guy that sleeps around and takes advantage of women.  He doesn’t have a perfect life, far from it, but his goal isn’t wealth or female conquests; it is helping others be better versions of themselves.  It isn’t as funny as, say, Two-And-A-Half men. Still, it conveys a message that isn’t preachy that suggests a life path that should end up with each of us being happier and avoiding much of the unnecessary drama that often defines our relationships.

I didn’t start grasping this concept until I was around 30 and think of those first three decades as somewhat wasted as a result.  Like most, I connected happiness to what you owned or had power over, and I, too, was molded by my parents and the media I consumed.  We are particularly susceptible to programming when we are young, and most children have no idea what happiness should be, let alone how to acquire it, by the time they become adults.

I’ve had conversations with some wealthiest men and most popular actors towards the end of their lives as I explored my future and discovered that not only didn’t wealth and popularity assure happiness, it often assured the opposite.  These men weren’t relishing their retirement; they were dreading the end of a life wasted surrounded by people that wanted them dead so they could get a piece of the wealth that had been accumulated.  They were successes to the world but failures in their minds.

We need more shows like Ted Lasso, but I also think we are letting kids down by not making a better effort of showing them early on that happiness comes more from having great friends, a family that you love and loves you, and a few pets that you worship and who worship you.  I learned over my life that wealth, power, and appearances don’t bring happiness, but a lack of drama, being around people who prioritize others and taking responsibility for your happiness do.

Empathy isn’t a bad thing; caring for others isn’t a bad thing, and spending some time exploring what you think will make you happy before committing your life to a path may better assure the life you want than chasing wealth, arm-candy, or power.  We need more well-written programs like Ted Lasso to help point us to sustainable happiness that can overcome the problems we’ll all face.

Shows like Ted Lasso help us understand the path we should be on and do a lot of good by showcasing the advantages of being a good person and how our attitudes can be a superpower in terms of having a wonderful life.

I’ll leave you with one final example that steps this concept of being good up a notch.  A recent survey looking at Trust placed two companies in danger of being broken up at opposite ends of the Trust spectrum.  Amazon scored very well because they go out of their way to protect their customers, Facebook very poorly because it seems far more focused on monetizing those customers than taking care of them.  As a result, Amazon appears to be far more able to weather the storms facing it than Facebook because of that customer care focus.  Dell beat out Sony in PCs, not because of a better product; it was arguably much worse, but because Dell treated its customers with problems far better than Sony did.

There are advantages to striving to be a good person, something that most shows seem to conceal; Ted Lasso is the exception; we desperately need more exceptions.

How VR is changing the future

British man arrested in Germany on suspicion of spying for Russia