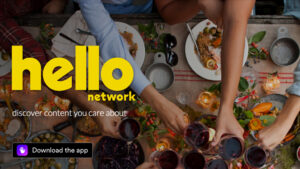 Remember Orkut, one of the most popular social networking website in early 2000s? It is back again, with a new social network called hello.

Hello is a social network that lets you connect with people who have the same interest and passions as you. But in the times of Facebook and Twitter, will Hello be able to make its mark in the minds of people or will it fade away like its parent company Orkut?

Orkut Buyukkokten, the creator of Orkut and Hello, has some plans on how to make his brain child a success.

In an interview Orkut Buyukkokten gave some insights on how Hello is different from other existing social networking websites.

Anonymity: In the times of Twitter where trolling is an everyday issue, Orkut has come up with this amazing feature of anonymity in his social network platform. Hello lets people go in on incognito mode, where they can post anonymously in situations that are uncomfortable.

Personalised experience: If you do not like politics, you will not see a single post about politics. Hello lets you chose the personas that you are interested in, and it will show you posts of that category only.

Connect with people with common interest: Hello is a social network that finds your location and helps you meet with people who share the same interests. And, once you meet someone, Hello sends you a connection report to tell you how compatible you are with them.

Having worked with Google for over 11 years, Orkut Buyukkokten also commented on why Google has not been able to get social networking right.

When people think of Google, they think about search and email. Google is not a social brand, it’s been harder for them to be more successful in social.

In the age of social networking, most of us sometimes wonder if we have lost ourselves, but Hello lets you express what you are passionate about, discover the content that you care about, and be yourself.